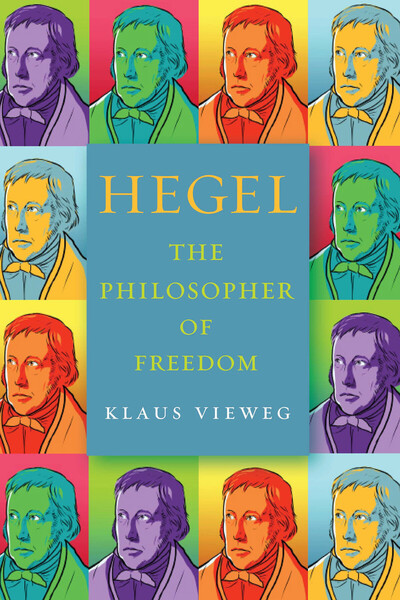 A monumental new biography of a pivotal yet poorly understood pioneer in modern philosophy.

When a painter once told Goethe that he wanted to paint the most famous man of the age, Goethe directed him to Georg Friederich Wilhelm Hegel. Hegel, the most famous figure in modern philosophy, arguably its father, worked from the credo: To philosophize is to learn to live freely. He was slow and cautious in the development of his philosophy; yet his intellectual growth is like an Odyssey of the mind, and, contrary to popular belief, his life was full of twists and turns, of suspense and even danger.

In this landmark biography, the philosopher Klaus Vieweg paints a new picture of the life and work of the most important representative of German idealism. His vivid portrait provides readers an intimate account of Hegel's times and the milieu in which he developed his thought, along with detailed, clear-sighted analyses of Hegel's four major works. What results is a new interpretation of Hegel through the lens of reason and freedom.

Vieweg draws on extensive archival research that has brought to light a wealth of hitherto undiscovered documents and handwritten notes relating to Hegel's work, touching on Hegel's engagement with the leading thinkers and writers of his age: Kant, Fichte, Schelling, Hölderlin and others. Combatting tired clichés and misunderstandings about Hegel, Vieweg also offers a sustained defense of the philosopher's more progressive impulses. Highly praised upon its release in Germany as having set the new biographical standard, this monumental work emphasizes Hegel's relevance for today, depicting him as a vital figure in the history of philosophy.

Klaus Vieweg is Professor of Classical German Philosophy at the Friedrich Schiller University, Jena and one of the world's leading Hegel experts. Vieweg has authored or edited over two dozen books, with translations appearing in Italian, Spanish, Chinese and English, among other languages.

"Vieweg's biography of Hegel is more than the best work in its field—it sets new standards for a book on Hegel and for a philosopher's biography as such. It magically unites a detailed knowledge about Hegel's life and work with a deep engagement in today's emancipatory struggle. It is not a historicist account of Hegel's work as the result of its time; it makes Hegel our own contemporary."

—Slavoj Žižek, author of Hegel in A Wired Brain

"This is a landmark in the 200-year literature on Hegel. Skillfully uncovering the complex strands of ideas and influences that the philosopher weaves together, Vieweg takes Hegel seriously as a living presence in our efforts to understand the world today."

—James J. Sheehan, author of Where Have All the Soldiers Gone?

"In a crystal clear and vivid style, as far as its subject matter allows, one can trace the development of Hegel's thinking, its roots and influences, but also its originality and, above all, its enduring political relevance."

"An extensive biography of Hegel has been missing for many decades. Thankfully, Klaus Vieweg now offers one that will be standard for years to come."