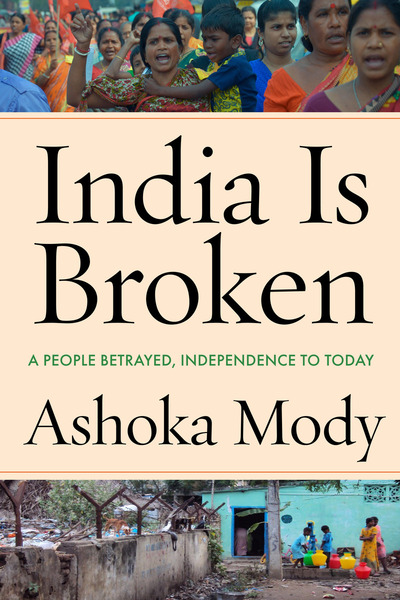 A provocative new account of how India moved relentlessly from its hope-filled founding in 1947 to the dramatic economic and democratic breakdowns of today.

When Indian leaders first took control of their government in 1947, they proclaimed the ideals of national unity and secular democracy. Through the first half century of nation-building, leaders could point to uneven but measurable progress on key goals, and after the mid-1980s, dire poverty declined for a few decades, inspiring declarations of victory. But today, a vast majority of Indians live in a state of underemployment and are one crisis away from despair. Public goods—health, education, cities, air and water, and the judiciary—are in woeful condition. And good jobs will remain scarce as long as that is the case. The lack of jobs will further undermine democracy, which will further undermine job creation. India is Broken provides the most persuasive account available of this economic catch-22.

Combining statistical data with creative media, such as literature and cinema, to create strong, accessible, people-driven narratives, this book is a meditation on the interplay between democracy and economic progress, with lessons extending far beyond India. Mody proposes a path forward that is fraught with its own peril, but which nevertheless offers something resembling hope.

Ashoka Mody is an economic historian at Princeton's School of Public and International Affairs. Formerly, he worked at the World Bank and the International Monetary Fund. He is the author of EuroTragedy: A Drama in Nine Acts (2018), and his writing appears often in outlets such as Financial Times, Project Syndicate, and Bloomberg View.

"This book is the most sustained, accessible, and trenchantly argued alternative account of India's political economy and democratic crisis that I have seen in many years. Engaging and well written, it tells a striking and disturbing story. A major achievement."

"A compellingly readable history of Indian politics and economics since independence. This is a magisterial account of how any democracy, even the world's largest, can be destroyed from within. Based on immense scholarship, it also uses great storytelling. Hard to put down!"