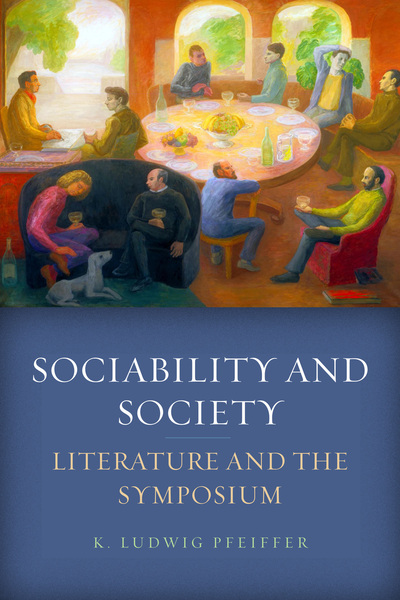 Sociability and Society
Literature and the Symposium
K. Ludwig Pfeiffer

Today, churches, political parties, trade unions, and even national sports teams are no guarantee of social solidarity. At a time when these traditional institutions of social cohesion seem increasingly ill-equipped to defend against the disintegration of sociability, K. Ludwig Pfeiffer encourages us to reflect on the cultural and literary history of social gatherings—from the ancient Athenian symposium to its successor forms throughout Western history.

From medieval troubadours to Parisian salons and beyond, Pfeiffer conceptualizes the symposium as an institution of sociability with a central societal function. As such he reinforces a programmatic theoretical move in the sociology of Georg Simmel and builds on theories of social interaction and communication characterized by Max Weber, George Herbert Mead, Jürgen Habermas, Niklas Luhmann, and others. To make his argument, Pfeiffer draws on the work of a range of writers, including Dr. Samuel Johnson and Diderot, Virginia Woolf and Marcel Proust, Dorothy Sayers, Joseph Conrad, and Stieg Larsson. Ultimately, Pfeiffer concludes that if modern societies do not find ways of reinstating elements of the Athenian symposium, especially those relating to its ritualized ease, decency and style of interaction, they will have to cope with increasing violence and decreasing social cohesion.

K. Ludwig Pfeiffer is Emeritus Professor of English and Comparative Literature at the University of Siegen and at Jacobs University Bremen. He is the author of The Protoliterary: Steps toward the Anthropology of Culture (Stanford, 2002), in addition to his many books in German.

"Sociability and Society switches with ease and elegance between theoretical argumentation, historical narrative, and literary criticism. An intensive, interesting, and inviting book for students of European cultural history, qualitative social theory, and literature."

"In this important and thought-provoking book, Pfeiffer tracks the history of the social form of the symposium and its multifarious successors. His open, essayistic style perfectly suits his protean subject matter."