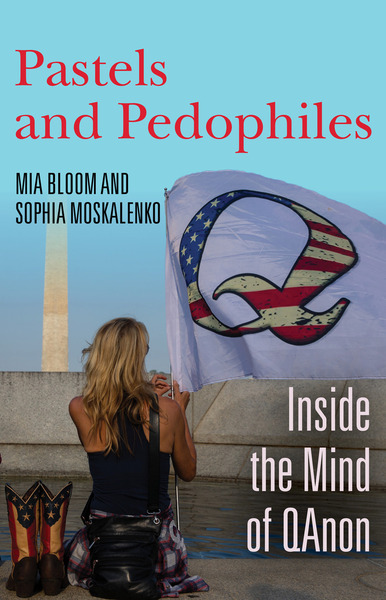 Two experts of extremist radicalization take us down the QAnon rabbit hole, exposing how the conspiracy theory ensnared countless Americans, and show us a way back to sanity.

In January 2021, thousands descended on the U.S. Capitol to aid President Donald Trump in combating a shadowy cabal of Satan-worshipping pedophiles. Two women were among those who died that day. They, like millions of Americans, believed that a mysterious insider known as "Q" is exposing a vast deep-state conspiracy. The QAnon conspiracy theory has ensnared many women, who identify as members of "pastel QAnon," answering the call to "save the children."

With Pastels and Pedophiles, Mia Bloom and Sophia Moskalenko explain why the rise of QAnon should not surprise us: believers have been manipulated to follow the baseless conspiracy. The authors track QAnon's unexpected leap from the darkest corners of the Internet to the filtered glow of yogi-mama Instagram, a frenzy fed by the COVID-19 pandemic that supercharged conspiracy theories and spurred a fresh wave of Q-inspired violence.

Pastels and Pedophiles connects the dots for readers, showing how a conspiracy theory with its roots in centuries-old anti-Semitic hate has adapted to encompass local grievances and has metastasized around the globe—appealing to a wide range of alienated people who feel that something is not quite right in the world around them. While QAnon claims to hate Hollywood, the book demonstrates how much of Q's mythology is ripped from movie and television plot lines.

Finally, Pastels and Pedophiles lays out what can be done about QAnon's corrosive effect on society, to bring Q followers out of the rabbit hole and back into the light.

"A revealing—and disturbing—analysis of a dangerous threat to American democracy."

"Pastels and Pedophiles is a primer on one of the knottiest subjects of our time, and it will surely be helpful to uninitiated readers."

"Experts on fringe movements (Bloom is a political scientist, Moskalenko a psychologist), the authors describe an entity that is at once a cult, a scam and a useful tool for the political Right."

"Pastels and Pedophiles... does particularly important work contextualizing QAnon within a longer history of anti-Semitic conspiratorial thinking, detailing linkages between key aspects of QAnon beliefs and anti-Semitic thinking, comparingThe Protocols of the Elders of Zionwith fake news or blood libel with adrenochrome harvesting. Such historical comparisons are interesting for thinking through some of the underlying ideological dynamics within QAnon."

"Pastels and Pedophiles is a great book for anyone seeking a basic, reliable introduction to the phenomenon of QAnon."

"Pastels and Pedophiles takes the reader on a wild ride through the world of QAnon and its adherents and raises some important questions and points on what can be done to minimize its impact and dismantle the movement in a post-January 6th world."

"Mia Bloom and Sophia Moskalenko's new bookPastels and Pedophiles: Inside the Mind of QAnonoffers a more sober and well-researched account of the movement. This is a good starting place for anyone looking for an overview of all things Q. ... Bloom and Moskalenko's examination of the gender politics of QAnon, including its special appeal for mothers struggling through COVID-19 lockdowns, is especially powerful."

How the QAnon Conspiracy Can Lure Women into Belief, Expert Says: They ‘Want to Help Children’

Keen On
Leonard Lopate at Large