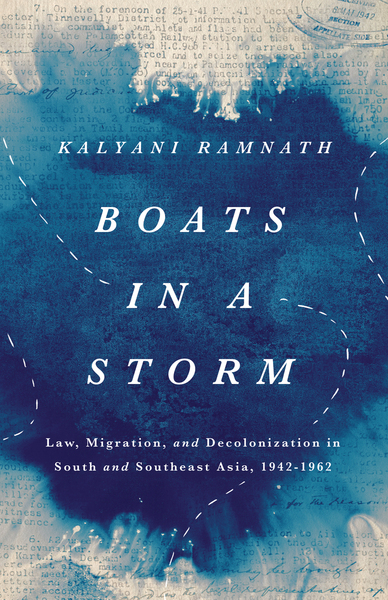 Boats in a Storm
Law, Migration, and Decolonization in South and Southeast Asia, 1942–1962
Kalyani Ramnath
SERIES: South Asia in Motion

For more than century before World War II, traders, merchants, financiers, and laborers steadily moved between places on the Indian Ocean, trading goods, supplying credit, and seeking work. This all changed with the war and as India, Burma, Ceylon, and Malaya wrested independence from the British empire. Set against the tumult of the postwar period,Boats in a Storm centers on the legal struggles of migrants to retain their traditional rhythms and patterns of life, illustrating how they experienced citizenship and decolonization. Even as nascent citizenship regimes and divergent political trajectories of decolonization papered over migrations between South and Southeast Asia, migrants continued to recount cross-border histories in encounters with the law. These accounts, often obscured by national and international political developments, unsettle the notion that static national identities and loyalties had emerged, fully formed and unblemished by migrant pasts, in the aftermath of empires.

Drawing on archival research conducted in India, Sri Lanka, Myanmar, London, and Singapore, Kalyani Ramnath narrates how former migrants battled legal requirements to revive prewar circulations of credit, capital, and labor, in a postwar context of rising ethno-nationalisms that accused migrants of stealing jobs and hoarding land. Ultimately, Ramnath shows how decolonization was marked not only by shipwrecked empires and nation-states assembled and ordered from the debris of imperial collapse, but also by these forgotten stories of wartime displacements, their unintended consequences, and long afterlives.

Kalyani Ramnath is Assistant Professor of History at University of Georgia.