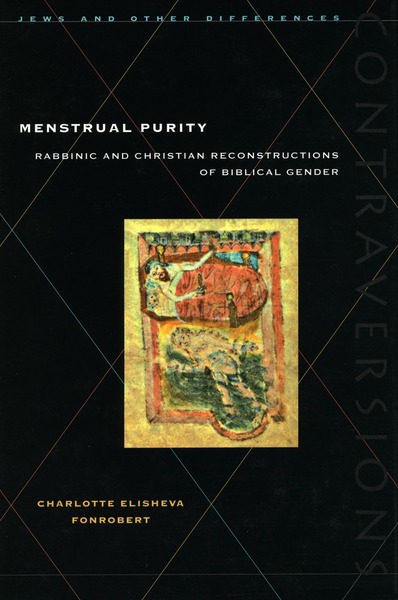 Winner of the 2001 Salo W. Baron Book Award, sponsored by The American Academy for Jewish Research.

This book offers a new perspective on the extensive rabbinic discussions of menstrual impurity, female physiology, and anatomy, and on the social and religious institutions those discussions engendered. It analyzes the functions of these discussions within the larger textual world of rabbinic literature and in the context of Jewish and Christian culture in late antiquity.

How did gender work—how was it made to work—in rabbinic literature? How did that literature dictate the place of women in Jewish culture? In search of answers to these questions, the author analyzes the architectural metaphors deployed to describe female anatomy, arguing that this discursive construction operated culturally to associate women with the home and exclude them from rabbinic study halls.

The author shows that rabbinic discourse is not completely controlled by rabbinic ideology, however. She analyzes talmudic discussions that allow alternative gender perspectives to emerge, indicating that women and their bodies were not completely objectified. This suggests that the Babylonian Talmud does not present a completely homogeneous gender structure, but contains a number of different, sometimes contradictory, possibilities.

The book concludes with a study of early Christian texts that relate to the same biblical laws on menstrual impurity as rabbinic texts, focusing in particular on a Jewish-Christian text in which the anonymous author polemicizes against Jewish women converts who remain attached to the biblical laws. This text allows us to reconstruct women’s perspectives on the inscription of religious meaning onto their bodies and physiological processes.

"This book is of central importance in the field of Rabbinic studies and the history of Judaism in late antiquity. The originality of Fonrobert's work lies in the skill and nuance with which she brings a series of reading strategies and hermeneutical perspectives to Rabbinic texts."

"Fonrobert's analysis throughout is sophisticated and nuanced, avoiding false dichotomies between rabbis as good for or bad for women, looking instead for ways to talk about traditional texts about women and their bodies in new and productive ways that do not define women solely in terms of male-centered discourse. . . . Challenging and illuminating . . . Fonrobert's work is an important contribution to the study of an area of Jewish ritual and gender that is at once sensitive to the complexities of the traditional sources and to the contemporary significance of her inquiries."

"Among the many complex, technical and obscure topics in the study of the Bible and early Judaism and Christianity, purity remains as perhaps the most recalcitrant. . . . [Charlotte Elisheva Fonrobert's Mentrual Purity, and Jonathan Klawans's Impurity and Sin in Ancient Judaism] are thus particularly welcome—both are revised dissertations as well as co-winners of the 2001/2 Salo W. Barton Book Prize of the American Academy for Jewish Research. Both books do an exemplary job of revitalizing the study of purity in antiquity and demonstrating how the combination of careful scholarship with modern methodological approaches can create new insights into an exceedingly difficult topic."

"...Fonrobert's book is a ground-breaking study that channels the research

of talmudic literature into a new and promising scholarly direction."