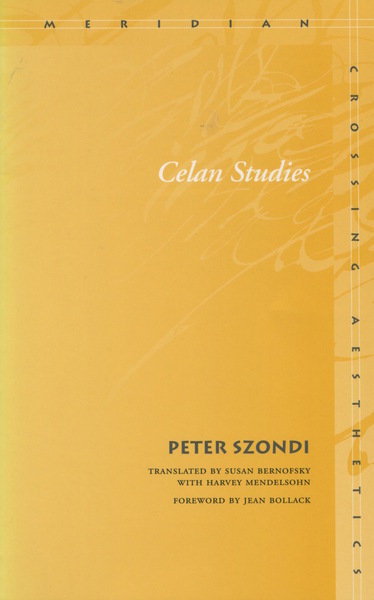 Peter Szondi's Celan Studies marked the beginning of critical work on Paul Celan, the most important German poet of the second half of the twentieth century.

The book's three studies each concentrate on a different Celan poem. "The Poetry of Constancy: Paul Celan's Translation of Shakespeare's Sonnet 105" investigates a historical turn from a poetry that claims to present its object to a poetry that only promises to do so. "Reading 'Engführung'" follows the movement of poetic language into territory undisclosed to epistemic reason. "Eden" addresses "Du liegst," a poem on the murder of Rosa Luxemburg and Karl Liebknecht; Szondi actually was with Celan when the poem was written. It analyzes the relation between the historical facts to which a poem refers and its composition.

The book contains, as appendixes, Szondi's notes for three more projected studies of Celan poems, left unwritten at the time of his death in 1971.

Peter Szondi (1929-1971) was Professor of Comparative Literature at the Free University in Berlin. He is the author of groundbreaking works on the theory of drama, on literary hermeneutics, on Hölderlin, and on Celan.

"The English translation of Szondi's seminal work constitutes an important landmark for Celan afficionados who are not proficient in the German language."