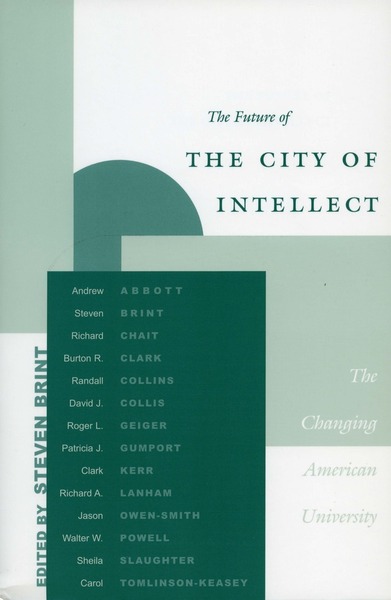 Based on new data and new analytical frameworks, this book assesses the forces of change at play in the development of American universities and their prospects for the future. The book begins with a lengthy introduction by Clark Kerr that not only provides an overview of change since the time he coined the phrase “the city of intellect” but also discusses the major changes that will affect American universities over the next thirty years.

Part One examines demographic and economic changes, such as the rise of nearly universal higher education, private gift and corporate sponsorship of research, new labor market opportunities, and increasing inequality among institutions and disciplines. Part Two assesses the profound influence of the Internet and other technologies on teaching and learning. Part Three describes how the various forces of change affect the nature of academic research and the organization of disciplines and the curriculum. Part Four analyzes the consequences of change for university governance and the means by which universities in the future can maintain high levels of achievement while maintaining high levels of autonomy.

Steven Brint is Professor of Sociology at the University of California, Riverside. He is the author, most recently, of Schools and Societies.

"As a collection that brings together the elements of scholarly debate with some nice field work—and includes a retrospective by the greatest of all American university presidents, Clark Kerr. . . . It possesses the great virtue of seriously adding to our understanding of how universities do or do not change in response to multiple and numbing pressure."

"In this book, Steven Brint has done a marvelous job of presenting the thinking of a number of notable scholars on the future of the American university. It is a captivating volume destined to be the focus of much discussion in academic circles as its distribution spreads throughout higher education. College and research librarians would be well served by becoming conversant with the issues raised in this book. . . . The topics presented in this book provide an opportunity for us to enter the debate and contribute to the building of a vision for the future."