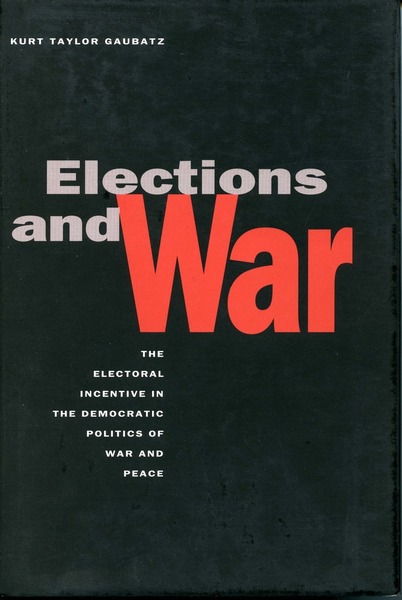 All state leaders must deal simultaneously with internal and external pressures. The conjunction of domestic electoral pressures and international pressures for war presents an acute form of this dilemma. Those who support increasing democratic influence on foreign policy have argued that this influence would make states more peaceful, while others have asserted that it would make foreign policy more volatile.

The author shows that democratic publics have been vulnerable to excessive enthusiasm for war, but that this enthusiasm is tempered in an electoral environment by the ability of politically legitimate antiwar leaders to increase the domestic costs of going to war. Democratic leaders may have an electoral incentive to seek out international conflict, but they also have a strong motivation not to allow such conflicts to escalate to war when elections are imminent.

The author also argues that the transparency of electoral politics in a democracy can lead to changes in the behavior of other states. Electoral institutions serve as an effective commitment mechanism for democratic states, and other states want to avoid contributing to the favorable electoral prospects of hawkish candidates. The author supports his argument with both structured case studies and analysis of the aggregate experience of all the democratic states over the past two centuries. He shows that despite variation in public attitudes toward international conflict, democratic states have engaged in significantly fewer wars in the period leading up to elections than in other parts of their electoral cycles.

"This is a very significant contribution to one of the most important current debates among both scholars and policy makers: the impact of democracy on war. Some authors have speculated about the impact of elections on 'democratic peace,' but no one has come close to the breadth and depth of the analysis in this book."

"Alexis de Tocqueville decried the inability of democracies to conduct efficient foreign policy, while contemporary academics and politicians praise democracies for their pacific behavior. In Elections and War, Gaubatz shows why both are right. This important book confirms that electoral pressures constrain democratic leaders' ability to make war, but they also provide incentives to ignore belligerent publics."

"In this important, well-written study, Gaubatz . . . uses case studies and aggregate data to illuminate the complex ways in which domestic institutions and public opinion influence foreign policy decisions. . . . This is a significant book. Although extensive scholarship exists on the democratic peace hypothesis (i.e., the claim that democracies don't go to war against other democracies), the literature on elections and war is limited."

"The book is a valuable and innovative contribution to the study of the relationship between the democratic process and decisions about peace and war."