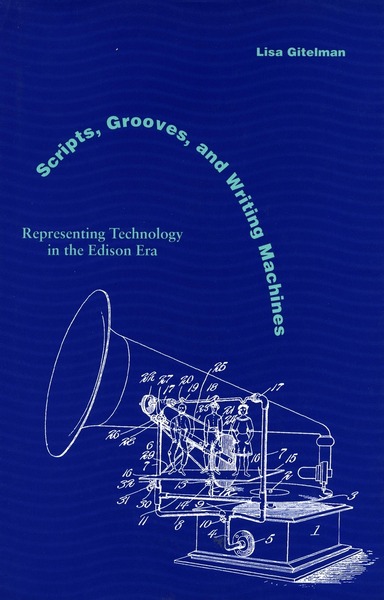 This is a richly imaginative study of machines for writing and reading at the end of the nineteenth century in America. Its aim is to explore writing and reading as culturally contingent experiences, and at the same time to broaden our view of the relationship between technology and textuality.

At the book’s heart is the proposition that technologies of inscription are materialized theories of language. Whether they failed (like Thomas Edison’s “electric pen”) or succeeded (like typewriters), inscriptive technologies of the late nineteenth century were local, often competitive embodiments of the way people experienced writing and reading. Such a perspective cuts through the determinism of recent accounts while arguing for an interdisciplinary method for considering texts and textual production.

Starting with the cacophonous promotion of shorthand alphabets in postbellum America, the author investigates the assumptions—social, psychic, semiotic—that lie behind varying inscriptive practices. The “grooves” in the book’s title are the delicate lines recorded and played by phonographs, and readers will find in these pages a surprising and complex genealogy of the phonograph, along with new readings of the history of the typewriter and of the earliest silent films. Modern categories of authorship, representation, and readerly consumption emerge here amid the un- or sub-literary interests of patent attorneys, would-be inventors, and record producers. Modern subjectivities emerge both in ongoing social constructions of literacy and in the unruly and seemingly unrelated practices of American spiritualism, “Coon” songs, and Rube Goldberg-type romanticism.

Just as digital networks and hypertext have today made us more aware of printed books as knowledge structures, the development and dissemination of the phonograph and typewriter coincided with a transformed awareness of oral and inscribed communication. It was an awareness at once influential in the development of consumer culture, literary and artistic experiences of modernity, and the disciplinary definition of the “human” sciences, such as linguistics, anthropology, and psychology. Recorded sound, typescripts, silent films, and other inscriptive media are memory devices, and in today’s terms the author offers a critical theory of ROM and RAM for the century before computers.

Lisa Gitelman is Assistant Professor of English and Media Studies at the Catholic University of America.

"A signal contribution to the exploding historiography of the phonograph."

"The range of Gitelman's evidence is impressive: deep research in the Edison archives, labels, patent documents, and literary sources. Historians will gain the most from the early chapters about the prehistory of phonography and the ways Americans perceived Edison's phonograph."