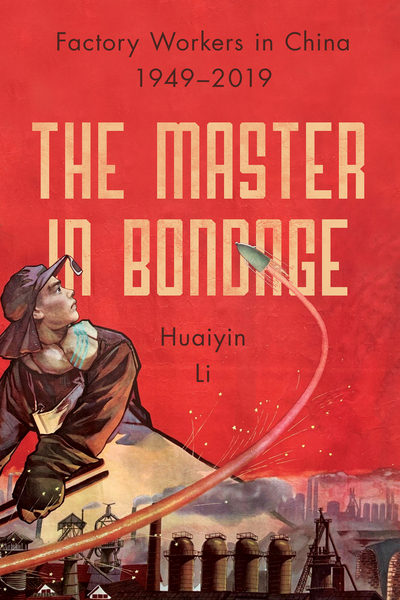 The Master in Bondage
Factory Workers in China, 1949-2019
Huaiyin Li

Drawing on a rich set of original oral histories conducted with retired factory workers from industrial centers across the country, this book provides a bottom-up examination of working class participation in factory life during socialist and reform-era China. Huaiyin Li offers a series of new interpretations that challenge, revise, and enrich the existing scholarship on factory politics and worker performance during the Maoist years, including the nature of the Maoist state as seen in the operation of power relations on the shop floor, as well as the origins and dynamics of industrial enterprise reforms in the post-Mao era.

In sharp contrast with the ideologically driven goal of promoting grassroots democracy or manifesting workers' status as the masters of the workplace, Li argues that Maoist era state-owned enterprises operated effectively to turn factory workers into a well-disciplined labor force through a complex set of formal and informal institutions that functioned to generate an equilibrium in power relations and work norms. The enterprise reforms of the 1980s and 1990s undermined this preexisting equilibrium, catalyzing the transformation of the industrial workforce from predominantly privileged workers in state owned enterprises to precarious migrant workers of rural origins hired by private firms. Ultimately, this comprehensive and textured history provides an analytically astute new picture of everyday factory life in the world's largest manufacturing powerhouse.

Huaiyin Li is Professor of History and Asian Studies at the University of Texas at Austin. He is the author of Village China Under Socialism and Reform: A Micro-History, 1948-2008 (Stanford, 2009).

"The Master in Bondageis not a simple history. In each chapter,HuaiyinLisystematically—and convincingly—makes a substantial contribution to the history of labor in China, challenging key tenets of what have become conventional understandings of industrial relations during the Maoist era."

"Huaiyin Li presents a treasure trove of oral history which can never be collected again, and which goes way beyond the documentary record to add so much that is significant, new, and surprising to our picture of the Chinese working class at a crucial juncture in its re-formation."