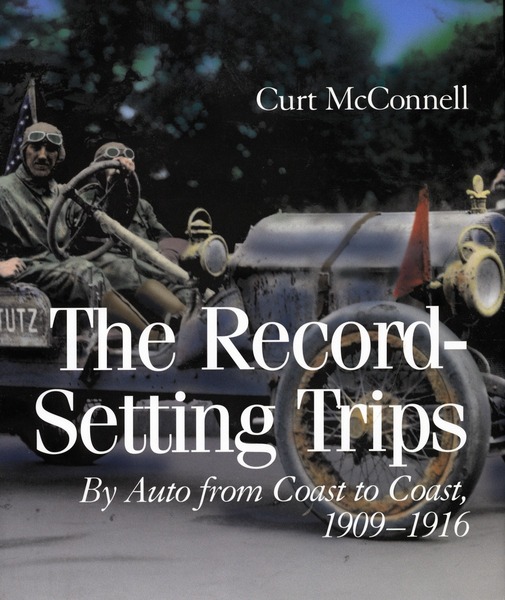 The Record-Setting Trips
By Auto from Coast to Coast, 1909-1916
Curt McConnell

Winner of the 2004 James Valentine Memorial Award, sponsored by the Society of Automotive Historians.

This lavishly illustrated book explores the vast publicity surrounding eight milestone transcontinental auto trips in the early twentieth century, and how this publicity produced a variety of changes in American life. Earlier coast-to-coast trips (described in the author's Coast-to-Coast by Automobile: The Pioneering Trips, 1899-1908 (Stanford, 2000) were also attention-grabbing events, but it was not until Pennsylvania lumberman Jacob Murdock became the first man to drive his family across the continent, that the average American began to see the automobile as a useful, practical means of traveling long distances. Murdock's trip ended the period when automakers (and others) would sponsor a cross-country trip merely to prove that it could be done.

The later trips chronicled in this book reflected the remarkable developments in automobile technology and durability, and demonstrated the automobile's recreational, military, and commercial possibilities as well. The accounts of these exciting trips—carried in newspapers and magazines across the land—captivated Americans. Our familiarity with modern interstate highways only increases our wonder that in the early twentieth century adventurous motorists were resourceful and determined enough to establish cross-country driving records when the few roads connecting cities were snow-clogged in winter, mud-bogged in spring, and pockmarked with deep and dusty ruts the rest of the year. These trips, which vividly illustrated what one observer called the "crying need for good roads" in the United States, are illustrated by some 125 rare photographs.

“Nobody has covered early transcontinental auto trips as well as McConnell, and I suspect nobody will supersede his efforts. In his new book, he makes eight motorcar treks across America’s vastness come alive. As his title indicates, these trips either set speed records or were so unusual—races, military experiments, tourist jaunts, or commercial tours—that they stood apart from earlier transcontinental efforts, and he has some colorful characters to talk about. The book is well written, and the photographs are superb.” —James A. Ward, University of Tennessee at Chattanooga