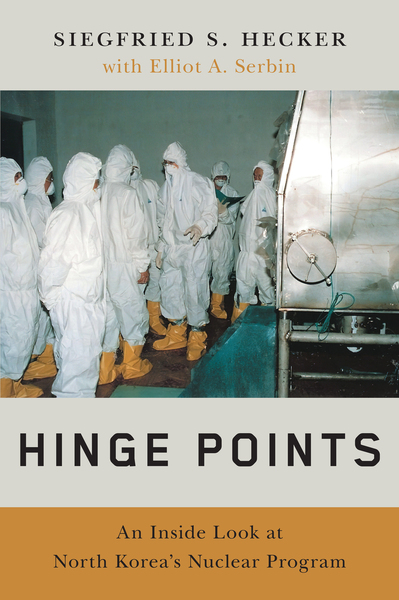 North Korea remains a puzzle to Americans. How did this country—one of the most isolated in the world and in the policy cross hairs of every U.S. administration during the past 30 years—progress from zero nuclear weapons in 2001 to a threatening arsenal of perhaps 50 such weapons in 2021?

Hinge Points brings readers literally inside the North Korean nuclear program, joining Siegfried Hecker to see what he saw and hear what he heard in his visits to North Korea from 2004 to 2010. Hecker goes beyond the technical details—described in plain English from his on-the-ground experience at the North's nuclear center at Yongbyon—to put the nuclear program exactly where it belongs, in the context of decades of fateful foreign policy decisions in Pyongyang and Washington.

Describing these decisions as "hinge points," he traces the consequences of opportunities missed by both sides.The result has been that successive U.S. administrations have been unable to prevent the North, with the weakest of hands, from becoming one of only three countries in the world that might target the United States with nuclear weapons. Hecker's unique ability to marry the technical with the diplomatic is well informed by his interactions with North Korean and U.S. officials over many years, while his years of working with Russian, Chinese, Indian, and Pakistani nuclear officials have given him an unmatched breadth of experience from which to view and interpret the thinking and perspective of the North Koreans.

Siegfried S. Hecker is senior fellow and professor emeritus at Stanford University and director emeritus of the Los Alamos National Laboratory. His expertise ranges from plutonium science to nuclear weapons and international security. Hecker has documented the history of post-Soviet Russian – American nuclear cooperation in the highly acclaimed Doomed to Cooperate. His scientific and diplomatic achievements have been recognized internationally, including the presidential Enrico Fermi Award, the American Nuclear Society's Eisenhower Medal and election to the National Academy of Engineering.

Elliot A. Serbin worked with Siegfried Hecker at Stanford University from 2016 to 2020. Serbin supported the Nuclear Risk Reduction Project and extensively researched the history and status of North Korea's nuclear program. Serbin has most recently worked at the U.S. Nuclear Regulatory Commission and Lawrence Livermore National Laboratory. He is currently a student at Harvard University where he is pursuing a J.D. and an M.A. in Public Policy.

"Hinge Points is a must-read for any serious practitioner of foreign relations. Siegfried Hecker lays out a riveting narrative derived from his "man in the ring" experiences over several decades. His deep insights are highly relevant to the challenges deriving from a nuclear-capable North Korea playing out in real-time."

"With dramatic visits to North Korea's long-closed nuclear facilities, and a full cast of top nuclear scientists and diplomats, Hinge Points offers a remarkable account of how North Korea became a nuclear power. Only Siegfried Hecker could have written this sobering tale of why and how the US—with worrying consequences—continues to get North Korea wrong."

"Written by a scientist who has actually walked around North Korea's nuclear complex, Hinge Points is a piercing analysis of the decades-long failure to curb Pyongyang's nuclear ambitions. With unparalleled mastery of both technical details and diplomatic complexities, Siegfried Hecker lays bare the history in a way that opens a future path to progress."

"With Hinge Points, Siegfried Hecker offers unique insights into North Korea' dangerous nuclear program. And no-one is better qualified to do so. Hecker has visited the North and talked with their nuclear experts many times—and has held their plutonium in his (gloved) hand."