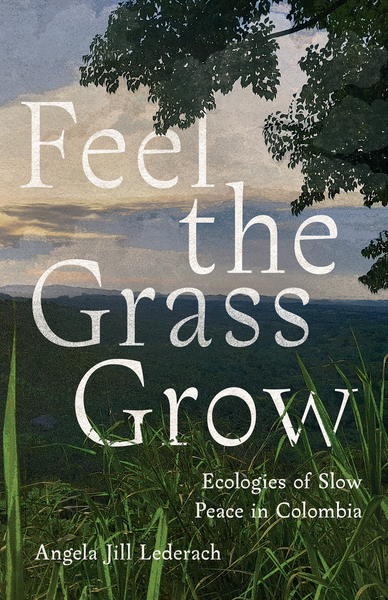 On November 24, 2016, the Colombian government and the Revolutionary Armed Forces of Colombia signed a revised peace accord that marked a political end to over a half-century of war. Feel the Grass Grow traces the far less visible aspects of moving from war to peace: the decades of campesino struggle to defend life, land, and territory prior to the national accord, as well as campesino social leaders' engagement with the challenges of the state's post-accord reconstruction efforts. In the words of the campesino organizers, "peace is not signed, peace is built."

Drawing on nearly a decade of extensive ethnographic and participatory research, Angela Jill Lederach advances a theory of "slow peace." Slowing down does not negate the urgency that animates the defense of territory in the context of the interlocking processes of political and environmental violence that persist in post-accord Colombia. Instead, Lederach shows how the campesino call to "slowness" recenters grassroots practices of peace, grounded in multigenerational struggles for territorial liberation. In examining the various layers of meaning embedded within campesino theories of "the times (los tiempos)," this book directs analytic attention to the holistic understanding of peacebuilding found among campesino social leaders. Their experiences of peacebuilding shape an understanding of time as embodied, affective, and emplaced. The call to slow peace gives primacy to the everyday, where relationships are deepened, ancestral memories reclaimed, and ecologies regenerated.

Angela Jill Lederach is Assistant Professor of Cultural Anthropology at Creighton University. She is the co-author, with John Paul Lederach, of When Blood and Bones Cry Out: Journeys Through the Soundscape of Healing and Reconciliation (2010).

"This book expertly and eloquently offers a close examination of how human and more-than-human relations are regenerated in the context of war and its aftermath.Lederachrecovers and makes visible how campesino peacebuilding emerges from a distinct ecological imagination, and their efforts to achieve in praxis reparation and reconciliation."

"Lederach's scholarship is impeccable, deftly fusing Colombian and international scholarship on peacemaking, her own ethnographic insights, and the voices of montemariano peasants, who are not mere interlocutors, but co-thinkers and mentors. This beautifully written book is a powerful example of what collaborative ethnography can be."