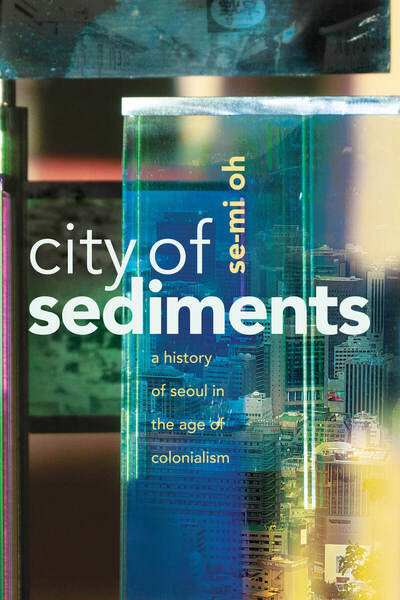 Once the capital of the five-hundred-year Chosŏn dynasty (1392–1897) and the Taehan Empire (1897–1910), the city of Seoul posed unique challenges to urban reform and modernization under Japanese colonial rule in the early twentieth century, constrained by the labyrinthian built environment of the old Korean capital. Colonial authorities attempted to employ a strategy of "erasure"—monumental Japanese architecture was, for instance, superimposed upon existing palace structures—to articulate to colonized Korean subjects the transition from the pre-modern to the modern, and the naturalization of colonial rule as inevitable historical change.

Drawing from and analyzing a wide range of materials, from architecture and photography to print media and sound recordings, City of Sediments shows how Seoul became a site to articulate a new mode of time—modernity—that defined the place of the colonized in accordance with the progression of history, and how the underbelly of the city, latent places of darkness filled with chatters of the alleyway, challenged this visual language of power. To do so, Se-Mi Oh builds an inventive new model of history where discrete events do not unfold one after the other, but rather one in which histories layer atop each other like sediment, allowing a new map of colonial Seoul to emerge, a map where the material traces of the city are overlapping, with vibrant residues of earlier times defiantly visible among the superimposed signs of modernity and colonial domination.

Se-Mi Oh is Assistant Professor of Modern Korean History at the University of Michigan.

"City of Sedimentsdoes an eloquent job of situating colonial Seoul in various theoretical contexts to scrutinize the uneven textures of urban landscape and the emotional commodification of everyday objects. Se-Mi Oh's voluminous reflections of the past, and her creative analysis of photography, signages, and aural sensibilities, set the gold standard for future historians."

"Bold and ambitious, beautifully written and rigorously argued, City of Sediments is a pathbreaking book that provides a new framework to explore the history of Seoul. Crisscrossing the vast range of fields—cultural history, visual arts, architecture, film, and media—it also builds an archive of extraordinarily rich and diverse materials, that include those that experiment with new forms of writing, those that capture the fleeting moments of new experiences, and those that have usually been considered inconsequential and insignificant."

"City of Sediments is one of the most sophisticated pieces of scholarship on the colonial period in Korea that has been written in the past two decades. It eloquently captures the nuances and dynamics of the history of colonial life in Seoul through the lens of sedimentary history, paving the way for rethinking how history should be represented and studied."