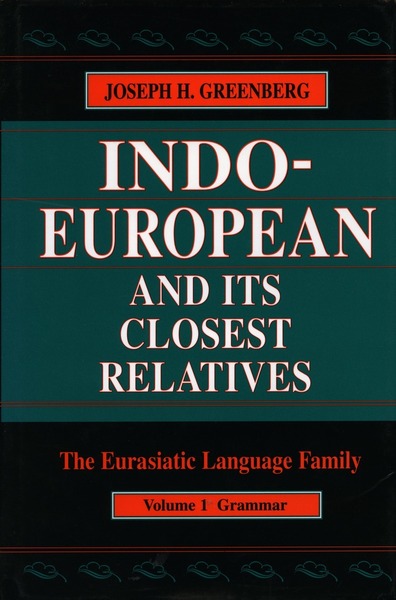 The basic thesis of this book is that the well known and extensively studied Indo-European family of languages is but a branch of a much larger Eurasiatic family that extends from northern Asia to North America. Eurasiatic is seen to consist of Indo-European, Uralic-Yukaghir, Altaic (Turkic, Mongolian, and Tungus-Manchu), Japanese-Korean-Ainu (possibly a distinct subgroup of Eurasiatic), Gilyak, Chuckchi-Kamchatkan, and Eskimo-Aleut. The author asserts that the evidence for the validity of Eurasiatic as a single linguistic family, including the vocabulary evidence to be presented in Volume II on semantics, confirms his hypothesis since the numerous and interlocking resemblances he finds among the various subgroups can only reasonably be explained by descent from a common ancestor.

The evidence in this volume deals in great detail with the distribution of 72 grammatical elements and the forms they take in the various Eurasiatic languages. The book also contains a historical introduction and a discussion of certain phonological phenomena. Of these phenomena, the most important is the vocal-harmony system found in many of these languages that is the ancestor of the so-called Ablaut variations of vowels in Indo-European, still seen in English in such contrasts as “come”/”came.” The origin and earliest form of this system have long been a puzzle to Indo-Europeanists, but in this work they are shown to be the outcome of this original system.

An appendix deals with the vowel variation of Ainu, which resembles that of other languages in Eurasiatic. The origin of the Ainu has hitherto been considered a great mystery, and this volume shows a north Asian origin, not, as some have thought, one in Southeast Asia or the Pacific. The book also includes a Classification of Eurasiatic Languages and an Index of the Etymologies.

“A very important book by a man whose work has been central to discussions of comparative linguistics throughout the second half of the 20th century.”—Carol Justus, University of Texas, Austin