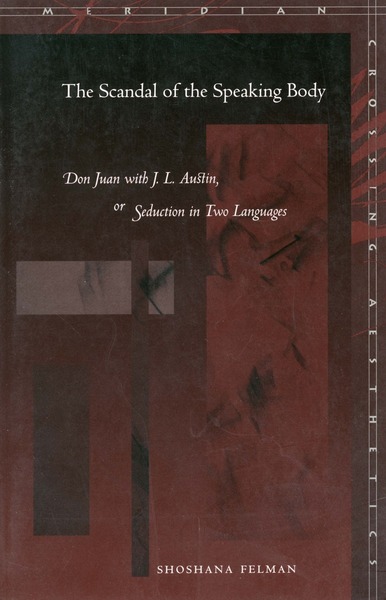 The Scandal of the Speaking Body
Don Juan with J. L. Austin, or Seduction in Two Languages
Shoshana Felman With a New Foreword by Stanley Cavell and Afterword by Judith Butler
SERIES: Meridian: Crossing Aesthetics

What is a promise? What are the consequences of the act of promising? In this bold yet subtle meditation, the author contemplates the seductive promise of speech and the seductive promise of love. Imagining an encounter between Molière’s Don Juan and J. L. Austin, between a mythical figure of the French classical theater and a twentieth-century philosopher, she explores the relation between speech and the erotic, using a literary text as the ground for a telling encounter between philosophy, linguistics, and Lacanian psychoanalytic theory. In the years since the publication of this book (which the author today calls “the boldest, the most provocative, but also the most playful” she has written), speech act theory has continued to play a central and defining role in the theories of sexuality, gender, performance studies, post-colonial studies, and cultural studies. This book remains topical as readers increasingly discover how multiply relevant the speaking body is.

Moving beyond the domain of formal linguistic analysis to address these questions, the author has written a daring and seductive book.

Shoshana Felman is the Thomas E. Donnelley Professor of French and Comparative Literature at Yale University. Her books include Literature and Psychoanalysis, Writing and Madness (in a new edition from Stanford University Press), Testimony, and (most recently) The Juridical Unconscious: Trials and Traumas in the Twentieth Century.