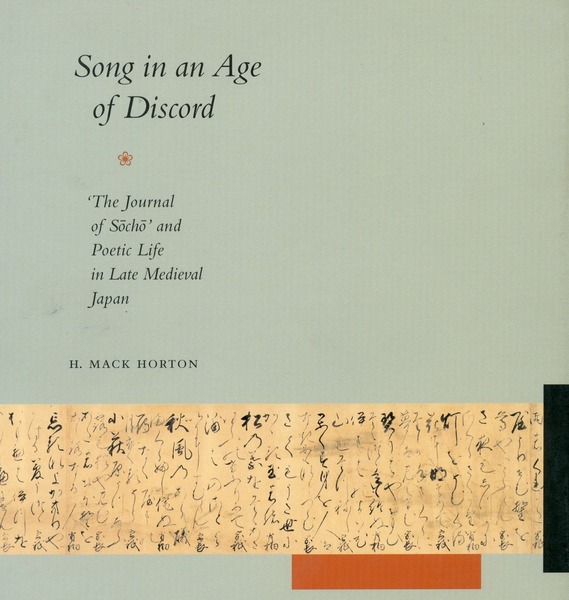 Song in an Age of Discord
The Journal of Socho and Poetic Life in Late Medieval Japan
H. Mack Horton

Song in an Age of Discord is a companion volume to the author's translation of The Journal of Socho, the travel diary and poetic memoir of Saiokuken Socho (1448-1532), the preeminent linked-verse (renga) poet of his generation. The Journal—which records several journeys that Socho made between Kyoto and Suruga Province during the tumultuous Age of the Country at War—is unparalleled in the literature of the period for its range of commentary and freshness of detail, and for its impressive array of literary genres, including more than 600 poems.

The present volume opens with an overview of the author's life and times, and explores the relationships between politics, patronage, and the creative process in late medieval Japan. Raised in the service of a feudal lord in Suruga Province, Socho subsequently became the devoted student of the renga master Sogi and the iconoclastic Zen monk Ikkyu, a variety of influences clearly visible in his journal. Socho lived in an era in which established values and hierarchies were being questioned, and his journal reflects his own testing of traditional literary boundaries.

Subsequent chapters read the journal in terms of the standard norms of genres that Socho appropriated and reinterpreted in fashioning his own literary persona. The norms of medieval eremitic literature are presented via works by two other noted linked-verse poets, Shinkei and Shohaku, and those of travel literature are set forth in travel diaries by Socho's teacher Sogi, who also supplied the template for Socho's orthodox (ushin) poetry.

The comic and unorthodox haikai verse of Yamazaki Sokan serves as a point of comparison for Socho's frequent excursions into that genre. Unlike other orthodox renga masters, Socho maintained parallel interests in composing and preserving haikai poetry, and he contributed much to that evolving art form. Throughout, Song in an Age of Discord illustrates the dialogue Socho pursued with his literary and cultural heritage.

H. Mack Horton is Associate Professor of Classical Japanese Literature at the University of California, Berkeley. He is the translator of The Journal of Socho.

"H. Mack Horton has succeeded admirably in bringing to life not only the rich humanity of Socho, his poetry, and his text, but also the literary world in which he was active . . . .[Song in an Age of Discord contains] rich, multifaceted contextualizations of Socho and his life in a time of turmoil and transition."

"...a fine entry into the cultural world of the elite classes of warring states in Japan."

"Professor H. Mack Horton's magisterial study of Saiokuken Socho adds a new perspective to the extensive body of renga scholarship in English published over the past twenty-odd years."