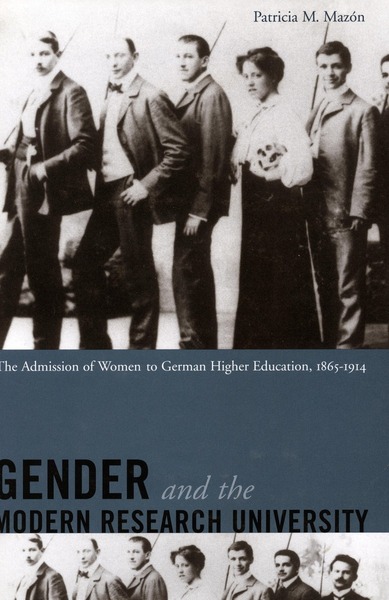 Gender and the Modern Research University
The Admission of Women to German Higher Education, 1865-1914
Patricia Mazón

In the 1890s, German feminists fighting for female higher education envied American women their small colleges. Yet by 1910, German women could study at any German university, a level of educational access not reached by American women until the 1960s. This book investigates this development as well as the cultural significance of the tremendous debate generated by aspiring female students.

Central to Mazón's analysis is the concept of academic citizenship, a complex discourse permeating German student life. Shaped by this ideal, the student years were a crucial stage in the formation of masculine identity in the educated middle class, and a female student was unthinkable. Only by emphasizing the need for female gynecologists and teachers did the women's movement carve out a niche for academic women.

Because the nineteenth-century German university was the model for the modern research university, the controversy resonates with contemporary American debates surrounding multiculturalism and higher education.

Patricia Mazón is Assistant Professor of History at the State University of New York at Buffalo.

"This book is important for modern German history and it is also filled with acute observations for all who are interested in educational opportunity and social change."

"This is a valuable study, informative and well researched."

"Adding to the growing number of studies on the history of women in higher education, Patricia Mazón's study will be of interest to scholars of women's history and of education and youth. The book is a successful hybrid of social and intellectual history, using a wide range of voices to explore the cultural terain on which the question of women's higher education was constructed and contested."

"...Gender and the Modern Research University is an important work in its own right, drawing gender into the heart of women's studies..."