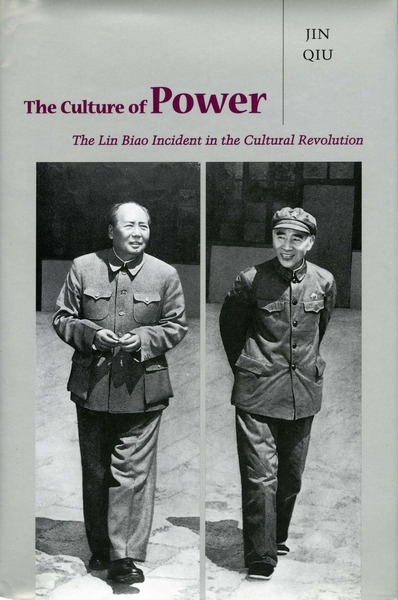 The Culture of Power
The Lin Biao Incident in the Cultural Revolution
Jin Qiu Foreword by Elizabeth J. Perry

On the night of September 12-13, 1971, Lin Biao, Mao Zedong’s officially recognized closest comrade-in-arms and chosen successor, was killed in a mysterious plane crash in Mongolia. The Chinese government did not issue an announcement of Lin’s death, and it became generally known only in the summer of 1972, when the official explanation stated that Lin had masterminded plans for a coup d’état and the assassination of Mao, and died fleeing to the Soviet Union after both plans had failed. But no convincing proof was offered to substantiate these claims, and the Lin Biao incident has remained an unsolved mystery.

The author brings unique credentials to her reexamination of the incident. She is the daughter of the former commander-in-chief of the Chinese air force, who served under Lin and, along with thousands of others, was imprisoned as a result of the purges that followed Lin’s death. For this book, she has drawn upon her father’s unpublished memoirs, interviews with former high government officials and their families, and her own experience and acquaintances among the government’s elite families, as well as an abundance of newly available documents. The book reexplores three key questions surrounding the Lin Biao incident: Why would Lin, the brilliant architect of pivotal victories in the Civil War who had been doggedly loyal to Mao for decades, suddenly attempt an ill-conceived coup? Why, when the alleged coup failed, would he defect to the Soviet Union? And why and how did Lin’s plane crash?

Challenging the official account, this book puts forth a radically different interpretation of the incident, arguing that in a narrow sense it was a consequence of the poisonous interplay of governmental politics and family politics during the Cultural Revolution. The roles of Lin’s wife, Ye Qun, and son, Lin Liguo, in the events leading up to the fateful flight are fully discussed for the first time in any language. This view is vividly set forth against a moving portrayal of Chinese society in the throes of the Cultural Revolution and the increasingly desperate efforts of an aging Mao to assure his own immortality.

"Highly recommended for all libraries."

"In describing the political culture that produced Lin Biao, Jin Qiu accomplishes what very few Westerners could ever hope to: the construction of a nuanced and reasonably full-orbed cultural discussion of the texture and tenor of extra-institutional machinations, interpersonal relationships, family and inter-family dynamics, and even jealousies and superstitions that figured into decision-making and policy formulation."

"Jin Qiu presents a fascinating and detailed investigation of one of the stranger twists in modern Chinese political history, and as such it is a significant contribution to scholarship on the period."