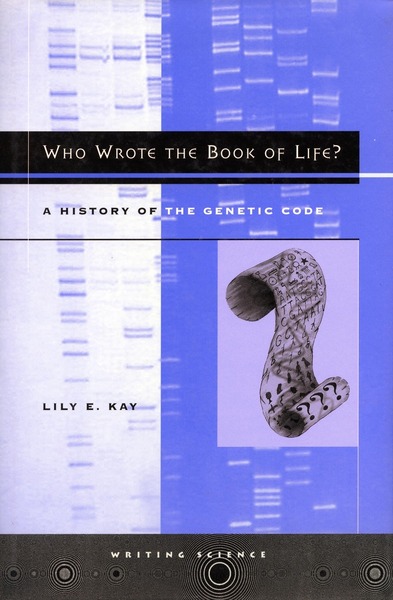 Who Wrote the Book of Life?
A History of the Genetic Code
Lily E. Kay
SERIES: Writing Science

This is a detailed history of one of the most important and dramatic episodes in modern science, recounted from the novel vantage point of the dawn of the information age and its impact on representations of nature, heredity, and society. Drawing on archives, published sources, and interviews, the author situates work on the genetic code (1953-70) within the history of life science, the rise of communication technosciences (cybernetics, information theory, and computers), the intersection of molecular biology with cryptanalysis and linguistics, and the social history of postwar Europe and the United States.

Kay draws out the historical specificity in the process by which the central biological problem of DNA-based protein synthesis came to be metaphorically represented as an information code and a writing technology—and consequently as a “book of life.” This molecular writing and reading is part of the cultural production of the Nuclear Age, its power amplified by the centuries-old theistic resonance of the “book of life” metaphor. Yet, as the author points out, these are just metaphors: analogies, not ontologies. Necessary and productive as they have been, they have their epistemological limitations. Deploying analyses of language, cryptology, and information theory, the author persuasively argues that, technically speaking, the genetic code is not a code, DNA is not a language, and the genome is not an information system (objections voiced by experts as early as the 1950s).

Thus her historical reconstruction and analyses also serve as a critique of the new genomic biopower. Genomic textuality has become a fact of life, a metaphor literalized, she claims, as human genome projects promise new levels of control over life through the meta-level of information: control of the word (the DNA sequences) and its editing and rewriting. But the author shows how the humbling limits of these scriptural metaphors also pose a challenge to the textual and material mastery of the genomic “book of life.”

The late Lily E. Kay was formerly an Associate Professor at the Massachusetts Institute of Technology.

"[Who Wrote the Book of Life] offers a convincing and historically rich analysis of the origins and ongoing negotiations involved in the production of the genetic code. . . . Kay is doing the work of mapping cultural shifts through tracing discursive circles of influence—not an easy task. The book has many strengths."

"Who Wrote the Book of Life? is, in general, carefully researched and technically accurate. It is a veritable treasure trove of quotations, citations and interesting information relating to its historical period."

"The entire book is fascinating and well written, unfolding more as a grand epic of the ways in which scientists work and think, rather than as a standard philosophical or historical treatise. The book is also an invaluable resource due to its exhaustive notes and reference sections. Highly recommended for all interested readers, undergraduates and up."