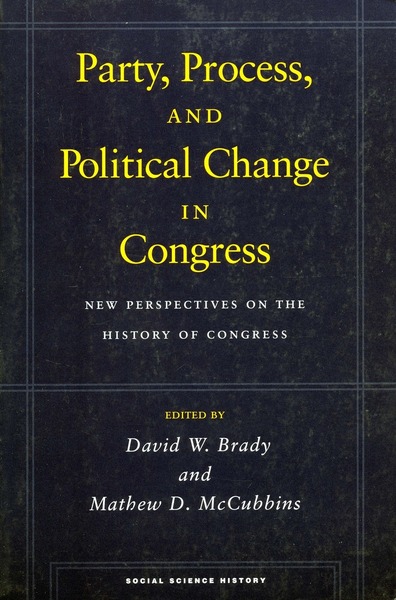 In recent decades, political scientists have produced an enormous body of scholarship dealing with the U.S. Congress, and in particular congressional organization. However, most of this research has focused on Congress in the twentieth century—especially the post-New Deal era—and the long history of Congress has been largely neglected. The contributors to this book demonstrate that this inattention to congressional history has denied us many rich opportunities to more fully understand the evolution and functioning of the modern Congress.

In striking contrast to the modern era, which is marked by only modest partisan realignment and institutional change, the period preceding the New Deal was a time of rapid and substantial change in Congress. During the nation’s first 150 years, parties emerged, developed, and realigned; the standing rules of the House and Senate expanded and underwent profound changes; the workload of Congress increased dramatically; and both houses grew considerably in size.

Studying history is valuable in large part because it allows scholars to observe greater variation in many of the parameters of their theories, and to test their core assumptions. A historical approach pushes scholars to recognize and confront the limits of their theories, resulting in theories that have increased validity and broader applicability. Thus, incorporating history into political science gives us a more dynamic view of Congress than the relatively static picture that emerges from a strict focus on recent periods.

David W. Brady is Bowen H. and Janice Arthur McCoy Professor of Political Science in the Stanford Graduate School of Business. Among his books are Continuity and Change in House Elections (with John F. Cogan and Morris P. Fiorina, Stanford, 2000) and Critical Elections and Congressional Policy Making (Stanford, 1988). Mathew D. McCubbins is Professor of Political Science at the University of California, San Diego. His work on Congress includes Legislative Leviathan (with Gary W. Cox).

"Policy, Process, and Political Change pulls together some of the leading scholars in partisanship and the historical development of congressional politics to offer an invaluable addition to the library of any student of Congress."

"All of these essays constitute high-powered marriages between sophisticated quantitative methods and powerful analytical theory."