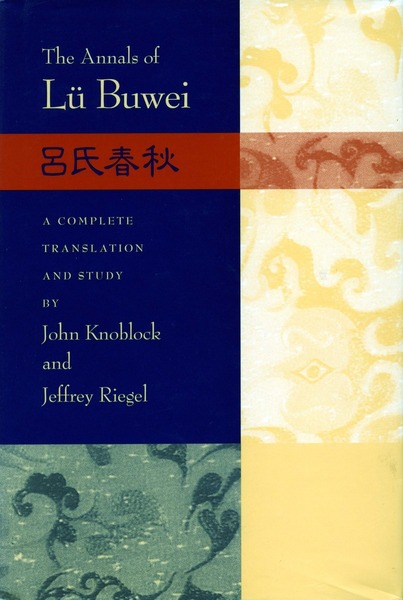 This is the first complete English translation of Lüshi chunqiu, compiled in 239 b. c. under the patronage of Lü Buwei, prime minister to the ruler of the state of Qin, who was to become the first emperor of a newly unified China fifteen years later. Lü retained a group of scholars whose aim was to encompass the world's knowledge in one great encyclopedia; so delighted was Lü with the finished work that he is said to have offered a fabulous prize of gold to anyone who could add or subtract even a single word.

An exceptionally rich and comprehensive compendium, The Annals of Lü Buwei recounts in engaging, straightforward, and readable prose the great variety of beliefs and customs of its time. The work is one of the great monuments of Chinese thinking, a work of originality and cohesion, inspired by a vision of a universal empire ruled by principles that ensured harmony between man and nature, protective of human and animal life, devoted to learning and culture, practicing benevolence and kindness, and motivated by reason and morality.

In addition to revealing an advanced state of technical knowledge, the Annals set forth a philosophy of government suitable to the centralized control that the Qin state would subsequently establish. It also took into account every philosophical trend of the day, sometimes adapting themes, sometimes combining ideas that had not previously been associated, sometimes rejecting and refuting positions that were in conflict with its basic vision. Because Lü aimed at comprehensiveness, his work preserved a number of systems of thought that are otherwise unknown or scarcely known. The Annals thus provides an essential tool for anyone seeking to reconstruct the philosophical controversies of the third century b. c. At the same time, Lü's compendium proclaims his independent, highly original philosophical positions. Today, with most of the works of classical Chinese philosophy long lost, The Annals of Lü Buwei remains indispensable as a summa of the Chinese intellectual world of its time.

"This book gives us the first complete English translation of the Lushi chunqiu. . . . Knoblock and Riegel aim for a book "in convenient form that will serve the needs of the general reader while providing the scholar with the information necessary to understand the decisions we have made in translating the text." They have succeeded admirably. . . . Recommended for all collections on early China."

"John Knoblock and Jeffrey Riegel have provided us with a marvelous work in this first rate annotated translation of the complete extant text, as well as extensive notes and appendices. . . . In the past, we have found ourselves in debt to the late John Knoblock for his Xunzi. Now we are further indebted to him and Jefrey Riegel for this splendid scholarly work."