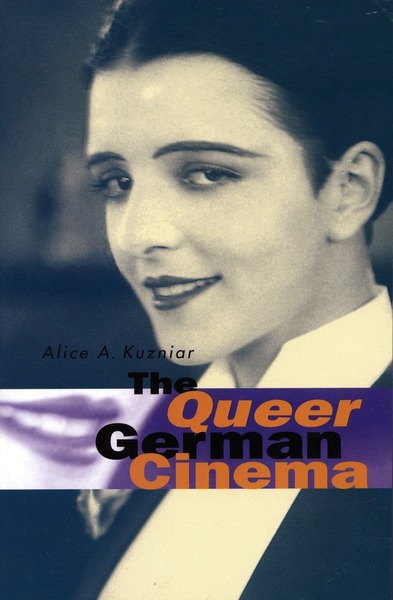 Since the Weimar era, German cinema has played a leading role in the innovation of gay and lesbian cinema, with the tantalizing sexual illegibility and gender instability of German films of the 1920s anticipating the queer sensibilities of the 1990s.

From such cross-dressing Weimar comedies as Viktor und Victoria to the transgender fantasies of Ulrike Ottinger, Monika Treut, and Hans Scheirl, this filmic tradition explores the unconventional erotic, its directors inventing a visual language that goes beyond the trivialization and sensationalism of mainstream representations of gays and lesbians. This cinema crosses the boundaries between such classifications as male and female, gay and bisexual, normal and pathological, insisting that such transgressions cannot be entirely tamed, regulated, or closeted. Previous scholarship, reading this national cinema as sociopolitical commentary, has tended to ignore what falls outside a realist, hetero-normative paradigm. In this book, the author aims to rectify this neglect by rewriting German cinematic history queerly.

She reexamines the Nazi movie star Zarah Leander via her gay fandom, showing how this actress haunts the drag performance of femininity in the films of Rainer Werner Fassbinder. She argues not only for the persuasiveness of the gay underground in the New German Cinema but also for cinema's pivotal role in German gay liberation. Other topics include the queering of nationality in the films of Monika Treut and Rosa von Praunheim, the fetishistic medium of experimental filmmaking in the works of Michael Brynntrup and Matthias Müller, and the androgynous appeal of "dyke noir animation." In conclusion, The Queer German Cinema juxtaposes the voices of several German filmmakers as they reflect on their art in terms of a counter-politics.

Alice A. Kuzniar is Professor of German and Comparative Literature at the University of North Carolina, Chapel Hill. She is the editor of Outing Goethe and His Age (Stanford, 1996).

"The Queer German Cinema will take its palce with other key works of German film studies scholarship . . . .It will also change the way we think about film, Germany, and gender."