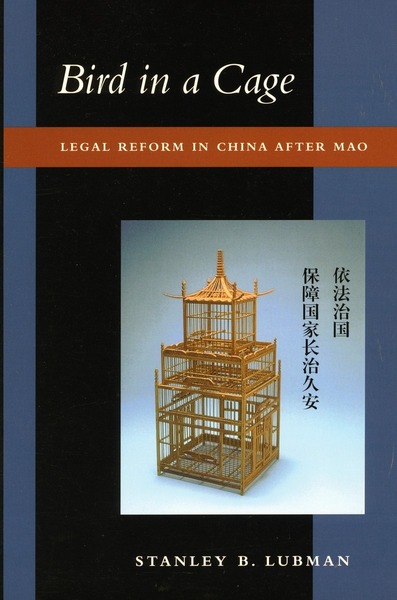 Bird in a Cage
Legal Reform in China after Mao
Stanley B. Lubman

Since 1979, China has been building new legal institutions made necessary by economic reforms that have reduced the role of state planning, and by the decline of Maoist totalitarianism. This book analyzes the principal legal institutions that have emerged and assesses the prospects for increasing the rule of law in China.

The book first establishes the cultural and institutional context in which legal reforms take place. It traces the main features of pre-Communist Chinese legal tradition, the drastic impact on law of thirty years of Maoist rule, and the extensive changes throughout Chinese society since Mao’s death, notably the rise of the local party-state at the expense of central government power. The book’s analysis begins with the Chinese leadership’s policy toward law, identifying basic ambivalence toward law that makes the Chinese commitment to legality incomplete. It then surveys major developments, emphasizing the creation of new rights, revision of criminal law and procedure, and construction of a nascent administrative law.

The book then examines in detail dispute resolution by extrajudicial mediation and the courts. Although mediation is no longer infused with Maoism, it is still used as an instrument to maintain public order. The study of the courts examines court organization, the selection and training of judges, the rise of litigation, the critical influence of localism, and ongoing conflicts between professionalism and a continuing tendency to view the judge as a soldier of the state. The author suggests that the limited role that Chinese courts are today permitted to play combines with the organization of the judicial process and the mentality of the judiciary to make Chinese adjudication more akin to bureaucratic decision making than judging in the West.

How should the accomplishments of legal reform and the continuing obstacles to further reform affect U.S. policy toward China? The book concludes by appraising implications for U.S. policy on such issues as human rights, Chinese involvement with the World Trade Organization, and bilateral relations generally. The author argues that U.S. policy makers must neither moralize about the rule of law nor dismiss it as a concept alien to China. They must also curb both optimism and expectations that legal reform will lead to political reform. Chinese law can only grow slowly, no matter how urgently the West may desire quick progress.

"This is a splendid book that should be read carefully by anyone interested in Chinese legal affairs and Chinese society more broadly. It reflects a lifetime's thoughtful acquaintance with and sympathetic understanding of the intricacies of Chinese law and life."

"Magesterial. . . . Few are better qualified to discuss law in China than Lubman. . . . This lucid book shows how far China must go to build even the most basic institutions."

"Lubman has been a major force in the academic and practical discourses of Chinese legal studies for most of the history of the PRC. . . . This is a masterful study . . . a major contribution to our understanding of the PRC legal system."

"This is an important book, which is already well on its way to becoming a classic."

"Lubman's book brings together a life-time of research and practice on chinese law to make it a vibrant and fascinating subject. . . . This wise and insightful book will be valuable not only for those interested in doing business in China but also for those seeking to understand Chinese civilization."Foreign Affairs

"Lubman has succeeded in providing an excellent overview of the current state of China's legal system and highlighting the key issues faced by the leadership of China as it contemplates the future."

"Bird in a Cage is the end product of rich first-hand experience, careful reflection, and serious scholarship."

"Bird in a Cage is an exploration of China's modern pursuit of legal reform and institution building. The product of nearly 30 years of Lubman's rich experience as a teacher, writer, and adviser, this uniquely insightful study is invaluable for legal scholars, lawyers, and law students wanting to understand Chinese attitudes toward law. More of a series of related essays than a textbook on Chinese law per se, it is also a wonderful reference book. . . . The book should also appeal to students of China more broadly. . . . In sum, Stanley Lubman's Bird in a Cage provides a veritable feast of fact, analysis, and insight for anyone seeking to understand and engage modern China."