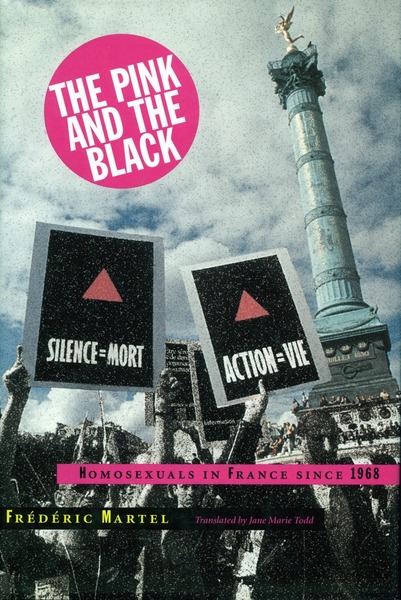 This book examines the development of France’s male and female homosexual communities and its gay liberation movements after 1968. The book focuses on the construction of social institutions, treating gay activist organizations and their relation to post-1968 French feminism, gay ghettos in French cities, the gay press, the impact of AIDS on political identity, and the renewed militancy of the 1990s. While acknowledging the influence of America’s gay liberation movement on the French situation, the author emphasizes the differences arising from the fact that homosexuality has not historically been criminalized in France as it has been in the United States.

The book is divided into four parts. Part I, “The Revolution of Desire (1968-79),” which examines the activism of the early post-1968 gay liberation movement, is preceded by a historical summary that traces French cultural, political, and social attitudes toward homosexuality. It also explores the relations between the movements for gay and women’s liberation in their various incarnations. Part II, “The Time of Socialization (1979-84)” describes the development of gay ghettos and the dissemination of gay institutions (media, countercultural venues, bars, baths, and the like). The pivotal year is 1981, which saw the advent of François Mitterrand’s government, with its pro-gay policies, as well as the first tracking of AIDS in the United States.

Part III, “End of the Carefree Life (1981-89),” deals with initial reactions in France to the AIDS epidemic, reactions that included the realization of its ubiquity, first with the death of Michel Foucault in 1984, and then with the media spectacle of Rock Hudson’s death in 1985. The author describes the French government’s response to the epidemic, the role of French medical researchers in searching for the causes of the infection, and the development of Aides (meaning helpers), a social, medical, and political-action group dedicated to raising public and personal awareness of AIDS. Part IV, “The Time of Contradictions (1989-96),” focuses on the changing social institutions of homosexuality in the 1990s: the development of ACT-UP, based on the American model, in France; the campaign to promote safer sex; the integration of seropositive individuals into the homosexual community; and the acceptance of homosexuality almost as a given. The book concludes with a thoughtful epilogue on the integration of minority communities into French society.

"An exhaustive, thoroughly researched work with a surprising 'you-are-there' readability."

"English-speaking audiences have a number of reasons for reading The Pink and the Black, not the least of which are its detailed chronology of events and its extensive bibliography. By remaining faithful to its original French edition, the English translation provides a fascinating, unabridged peek into the French debates over how to construct a new brand of homosexuality, an identity Made in France. The Pink and the Black is an important addition to cross-cultural studies of homosexuality."