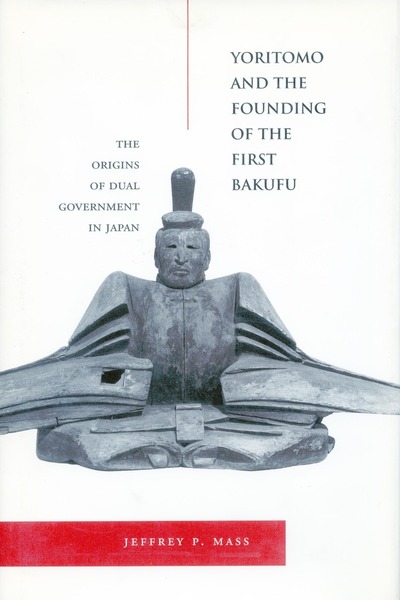 Yoritomo and the Founding of the First Bakufu
The Origins of Dual Government in Japan
Jeffrey P. Mass

This book is a much expanded and wholly rewritten treatment of the subject of the author's first book, Warrior Government in Early Medieval Japan, published in 1974. In this new version, the "warrior" and "medieval" character of Japan's first shogunate is significantly de-emphasized, thus requiring not only a new title, but also a new book.

The author's new view of the final decades of twelfth-century Japan is one of a less revolutionary set of experiences and a smaller achievement overall than previously thought. The pivotal figure, Minamoto Yoritomo, retains his dominant role in establishing the "dual polity" of Court and Bakufu, but his successes are now explained in terms of more limited objectives. A new regime was fit into an environment that was still basically healthy and vibrant, leading not to the substitution of one government for another, but rather to the emergence of a new authority that would have to interact with the old.

The book aims to present a dual perspective on the period by juxtaposing what we know against our best possible estimate of what Yoritomo himself knew. It is deeply concerned with the multiple balancing acts introduced by this ever nimble experimenter in governing, who was forever seeking to determine, and then to promote, what would work while curtailing or eliminating what would not. The author seeks to recreate step-by-step the movement from one historical juncture to another, whether this means adapting already available information, building anew, or working with combinations of materials. Throughout, the book addresses new topics and offers many new interpretations on subjects as wide-ranging as the 1189 military campaign in the north and the phenomenon of delegated authority.

Jeffrey P. Mass is Yamato Ichihashi Professor of Japanese History and Civilization at Stanford University. He is the author or editor of eight other books published by Stanford University Press, most recently The Origins of Japan's Medieval World: Courtiers, Clerics, Warriors, and Peasants in the Fourteenth Century (editor, 1997).