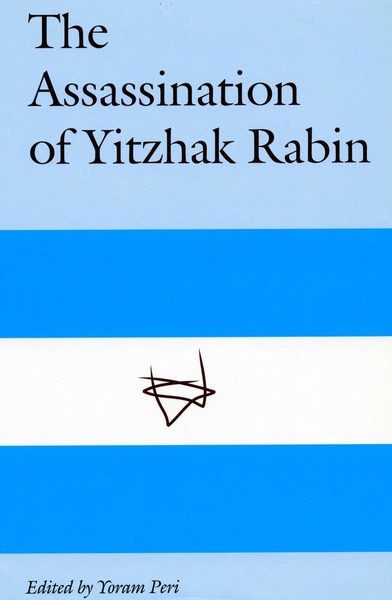 The Assassination of Yitzhak Rabin
Edited by Yoram Peri

The three shots fired into the back of Israel’s prime minister, Yitzhak Rabin, on the night of November 4, 1995, were a blow to Israel’s social body. The shock, horror, and pain caused by the murder found direct and overwhelming expression at the funeral and memorial ceremonies held in Jerusalem, attended by most of the world’s leaders.

This book deals with the social and political developments in Israel in the painful process of decolonization from the occupied territories, following the late 1980s Palestinian Intifada and its aftermath. Fifteen distinguished contributors from a range of disciplinary viewpoints—historical, psychological, anthropological, political, and cultural—survey the various reactions to the assassination and analyze its ramifications and repercussions, creating a powerful mosaic of Israel with the assassination at its center.

The fear that the murder would lead to civil war did not materialize. In fact, with hindsight it seems that the prime minister was a scapegoat, a victim of a deeply divided society split not only over the issue of peace with its neighbors but, more profoundly, over the construction of Israel’s collective identity and consciousness. The assassination showed how easy it is for religious fundamentalists to ignore democratic rules and how militant nationalists will resort to violence to prevent the surrender of parts of the Holy Land.

The strength of these elements of society was manifested in the general elections of 1996, when Rabin’s adherents lost to the nationalist-clerical group. Paradoxically, the reaction to the assassination also revealed Israel’s growing desire to pursue the peace process, and when Prime Minister Netanyahu failed to do so, he was replaced before his term ended. Less than four years after the assassination, the Israelis put the reigns of government back into the hands of Rabin’s successors, who promised to continue in his path.

With the road to peace lengthy, painful, and hazardous, have the fanatics learned a lesson from the aftermath of Rabin’s murder? Will he be the last victim? Will Israeli democracy survive the agony of shrinking to the tiny size of the pre-1967 boundaries? Will Israeli society develop into a Western democratic and enlightened model, or will it become a reactionary, ethnocentric, xenophobic backwater? This volume does not propose definitive answers to these questions, but it reflects on them in very thoughtful and knowledgeable ways.

Yoram Peri is Professor of Communication and Political Sociology at the Hebrew University, Jerusalem.

"The Assassination of Yitzhak Rabin provides the most comprehensive scholarly analysis of Rabin's assassination that is available to date. For those wishing to understand the causes of the assassination and the reactions to it, it is indispensable. It also provides a wealth of valuable insights for anyone interested in the social and cultural processes of national mourning, grief, and commemoration. Finally, the book offers an outstanding example of how contributions from a variety of disciplinary perspectives can explore a topic of common concern. One can only hope that more such interdisciplinary efforts will appear in future."