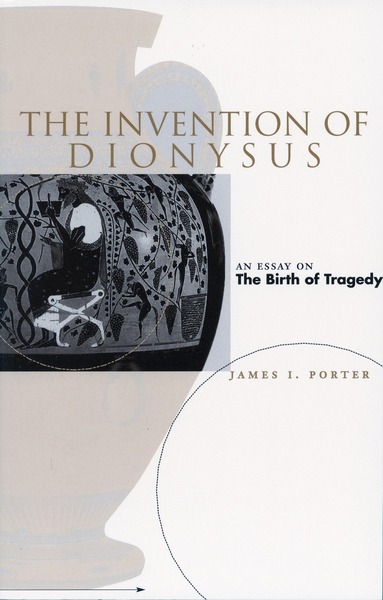 The Invention of Dionysus
James I. Porter

This book argues that The Birth of Tragedy, Nietzsche's first book, does not mark a rupture with his prior philosophical undertakings but is, in fact, continuous with them and with his later writings as well. These continuities are displayed above all in the entanglement of his surface narratives, in the self-consuming artifice of his writing, in the interplay of his voices, posturings, and ironies—in a word, in his staging of meaning rather than in his advocacy of one position or another.

The author shows that many of the substantive elements of The Birth of Tragedy are reminiscent of Nietzsche's earlier revisions of philology and that they anticipate the later writings: the inversion of the Dionysian and Appollinian domains; the interest in the atomistic challenge to Platonism (one of Nietzsche's lifelong concerns); and the theory of the all-too-human subject that emerges as a cultural anthropology, a hauntingly present reminder of human pretensions and their limits, which is likewise a thread that runs through the whole of Nietzsche's oeuvre, critically undoing what his philosophy appears to erect. The author argues that the coherence of Nietzsche's writings up to and including The Birth of Tragedy is incontestable. It points to a fact that needs to be turned to account in any reading of The Birth of Tragedy, namely that Nietzsche is a most unreliable witness to his own meaning.

The first parts of the study focus on broader issues: the relation of The Birth of Tragedy to the later writings; the problems of what the author calls "the metaphysics of appearances" (as opposed to the identification of the metaphysical as a realm lurking "behind" appearances); and the appearance—the apparition—of metaphysics in both the early and late works. In the latter parts of the study, the focus falls more narrowly on the formal and thematic complications in the narrative of The Birth of Tragedy. This book, the author argues, is a self-standing, complexly organized, and complete piece of imagining that needs to be examined on its own terms. And so while the surrounding philosophical reflections that Nietzsche made prior to and at the time of The Birth of Tragedy are brought in as needed, for instance the notes on Kant, Schopenhauer, and Lange, the primary interest lies in the self-presentation of the work itself.

James I. Porter is Associate Professor of Classical Studies and Comparative Literature at the University of Michigan. He is the editor of Constructions of the Classical Body and the author of Nietzsche and the Philology of the Future (Stanford, 1999).

The Invention of Dionysus breaks new ground in our appreciation of Nietzsche...Porter's minute and innovative reading...is both challenging and stimuling, requiring us to return to a work too often glossed over."