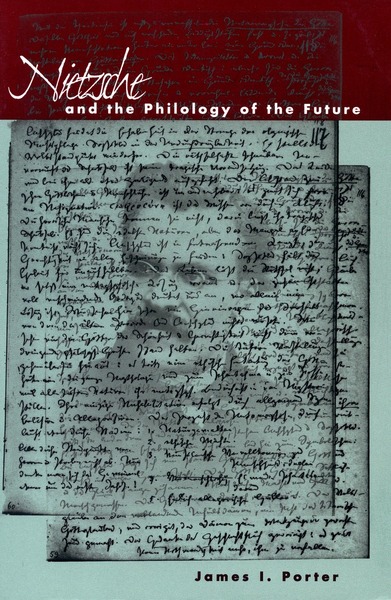 Nietzsche and the Philology of the Future
James I. Porter

Drawing on Nietzsche's prolific early notebooks and correspondence, this book challenges the polarized picture of Nietzsche as a philosopher who abandoned classical philology. It traces the contours of his earliest philological thinking and opens the way to a fresh view of his later thinking. The book's primary aim is to displace the developmental logic that has been a controlling factor in Nietzsche's reception, namely the assumption that Nietzsche passed from a precritical phase to an enlightened phase in which he liberated himself from metaphysics. A subsidiary aim is to decenter the view that fastens onto The Birth of Tragedy as a dramatic turning point in Nietzsche's thought.

For Nietzsche, questions about the religion, art, and history of the classical world are bound up with fundamental questions about knowledge, culture, history, and the status of the subject. From his early writings, Nietzsche finds it difficult to separate questions about modernity from those about antiquity. Nor are the problems of classical philology ever far from his mind, even toward the end of his career. By showing how frequently the "later" Nietzsche appears in the early writings, the author hopes to provoke reflection on the adequacy of current characterizations of Nietzsche, and not just to raise questions about the periodization of his life and thought.

The book traces Nietzsche's efforts, throughout his career, to determine the ways in which philosophy and philology are symptomatic of modern cultural habits, ideologies, and imaginings. In the form of a cultural anthropology, he may even have outlined the most trenchant model still available for confronting the ghostly specters that haunt Western society. Nietzsche's incessant preoccupation with the symptomatology of the modern subject—its ailments, its allusions, and the signs of its irrepressible presence—unifies his oeuvre more than any other single question.

The author argues that Nietzsche arrived at this inquiry from a philological perspective, according to which subjective identity is viewed as part of a historical process. Embodied in practices, habits, and institutions, these inheritances of culture—of which classical antiquity is a crucial part—undergo the vicissitudes of transmission, decipherment, reconstruction, reception, and especially falsification (whether through unwilled or deliberate misunderstanding). All of these factors are intimately bound up with the ways in which subjects form themselves.

James I. Porter is Chancellor's Professor of Rhetoric at University of California, Berkeley. He is the editor of Constructions of the Classical Body and the author of The Invention of Dionysus (Stanford, 1999).

"Students of Nietzsche will welcome this fine study, which focuses on the philosopher's early philological writings in order to demonstrate that there is far more continuity in the Nietzschean oeuvre than is often thought. . . . Highly recommended for all upper-division undergraduates and above."

"This is an excellent book, exhaustively documented and subtly written. Its greatest contribution will probably be to students of Nietzsche, for whom it presents cogent, intelligent readings of under-discussed material. But it should not be ignored by classical philologists, for whom it will serve as a challenge and a source of strength. Books like this, and debates about them, will help foster a dialogue between students of ancient and modern philosophy and literature that is weaker than it should be."

"This work will be of interest to, and should be studied by, a wider audience than its title may initially suggest . . . .Porter's provocative readings . . . .convincingly demonstrate the need for more attention to this largely neglected area of Nietzsche's writing."

—The Review of Metaphysics