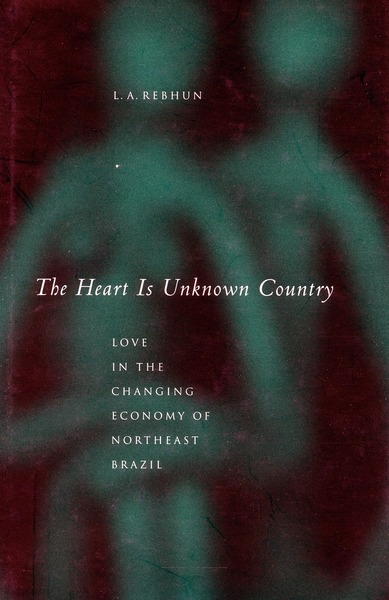 The Heart Is Unknown Country
Love in the Changing Economy of Northeast Brazil
L. A. Rebhun

This is a study of love, specifically of men’s and women’s emotional roles vis-à-vis one another in Northeast Brazil; of how people form conjugal relationships in this region; and of the impact of rapid socioeconomic change on courtship, marriage, cohabitation, and infidelity.

Rapid urbanization and expansion of the cash economy have transformed the region in a few decades. Among the transformations are shifts in how people conduct courtship, form marriages, view the proprieties of sexual behavior, and assess the proper social and economic roles of men and women. These changes have altered the relative importance of physical, economic, and emotional intimacy in conjugal relationships, transforming the nature of marriage—once defined as a largely economic relationship—into a largely emotional relationship, as ideas of romance once associated with infidelity, concubinage, and courtship are increasingly attached to marriage.

The book is largely based on interviews with men and women who talked about their often complicated love lives with wit and passion, and the book is rich in personal stories and quotations. Women were asked to discuss the nature of men and women, and men were asked to talk about women. Both sexes were questioned about their views on prostitution, concubinage, and promiscuity, as well as their definitions of love. Parents were asked for their views about marriage and child rearing (especially differences in raising boys and girls), their relations with their own parents, lovers, spouses, and friends, and their views on virginity and sexual propriety. The bluntness and articulateness of the informants about their motivations and experiences not only demonstrated that men and women viewed conjugal relationships very differently but enabled the author to specify and explore these differences in unusually interesting ways.

L. A. Rebhun is Associate Professor of Anthropology at Yale Universi

"Rebhun's marvelous study . . . gives us richly drawn portraits of women realigning their status and relationships with men, parents, children, bosses, and the impersonal forces of the market economy. . . . Rebhun's precise and engaging writing style keeps the reader focused on the materials at hand. . . . A well-written, beautifully realized study."