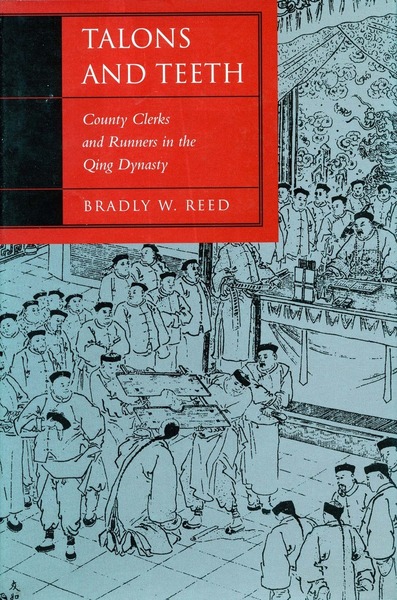 For commoners in the Qing dynasty, the most salient agents of the imperial state were not the emperor's appointed officials but rather the clerks and runners of the county yamen, the lowest level of functionaries in the Qing state's administrative hierarchy. Yet until now we have known very little about these critically important persons beyond the caricatured portrayals of corruption and venality left by Qing high officials and elites.

Drawing from the rich archival records of Ba county, Sichuan, the author challenges the simplicity of these portrayals by taking us inside the county yamen to provide the first detailed look at local administrative practice from the perspective of those who actually carried it out. Who were the county clerks and runners? How were they recruited, organized, disciplined, and rewarded? What was the economic basis for a career in the yamen? How did clerks and runners view themselves as well as legitimize their role in Qing government? And what impact did their interests and practices have on symbolically laden elements of imperial government such as the magistrate's court?

In addressing these questions, the author traverses the disjuncture between statutory regulations and the realities of daily administrative practice, uncovering a realm of informal, semiautonomous, yet highly structured and even rationalized procedures. Although frequently in violation of formal law, this extra-statutory system nevertheless remained an irreducible component of local government under the Qing. Recognizing the centrality of such informal practice to yamen administration forces us to rethink not only traditional assumptions concerning local corruption in the Qing, but also the ways in which we conceptualize the boundaries between state and society in late imperial China.

Bradly W. Reed is Assistant Professor of History at the University of Virginia.

“...the book is a valuable contribution to the study of a sophisticated bureaucracy in a non-Western, nonmodern setting.”—Robin D.S. Yates, McGill University