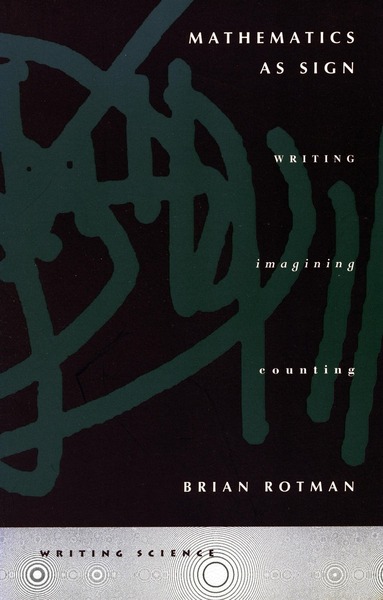 Two features of mathematics stand out: its menagerie of seemingly eternal objects (numbers, spaces, patterns, functions, categories, morphisms, graphs, and so on), and the hieroglyphics of special notations, signs, symbols, and diagrams associated with them. The author challenges the widespread belief in the extra-human origins of these objects and the understanding of mathematics as either a purely mental activity about them or a formal game of manipulating symbols. Instead, he argues that mathematics is a vast and unique man-made imagination machine controlled by writing.

Mathematics as Sign addresses both aspects—mental and linguistic—of this machine. The opening essay, "Toward a Semiotics of Mathematics" (long acknowledged as a seminal contribution to its field), sets out the author's underlying model. According to this model, "doing" mathematics constitutes a kind of waking dream or thought experiment in which a proxy of the self is propelled around imagined worlds that are conjured into intersubjective being through signs.

Other essays explore the status of these signs and the nature of mathematical objects, how mathematical ideograms and diagrams differ from each other and from written words, the probable fate of the real number continuum and calculus in the digital era, the manner in which Platonic and Aristotelean metaphysics are enshrined in the contemporary mathematical infinitude of endless counting, and the possibility of creating a new conception of the sequence of whole numbers based on what the author calls non-Euclidean counting.

Reprising and going beyond the critique of number in Ad Infinitum, the essays in this volume offer an accessible insight into Rotman's project, one that has been called "one of the most original and important recent contributions to the philosophy of mathematics."

Brian Rotman teaches in the Division of Comparative Studies at The Ohio State University. He is the author of Ad Infinitum . . . The Ghost in Turing's Machine: Taking God Out of Mathematics and Putting the Body Back In: An Essay in Corporeal Semiotics (Stanford, 1993) and Signifying Nothing: The Semiotics of Zero (Stanford paperback, 1993).