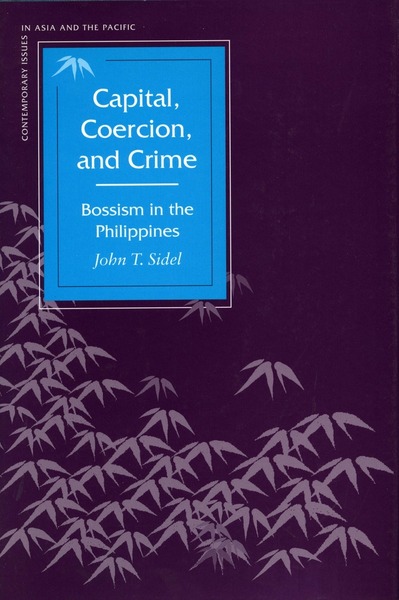 Capital, Coercion, and Crime
Bossism in the Philippines
John T. Sidel
SERIES: Contemporary Issues in Asia and the Pacific

This book focuses on local bossism, a common political phenomenon where local power brokers achieve monopolistic control over an area's coercive and economic resources. Examples of bossism include Old Corruption in eighteenth-century England, urban political machines in the United States, caciques in Latin America, the Mafia in Southern Italy, and today's gangster politicians in such countries as India, Russia, and Thailand.

For many years, the entrenchment of numerous provincial warlords and political clans has made the Philippines a striking case of local bossism. Yet writings on Filipino political culture and patron-client relations have ignored the role of coercion in shaping electoral competition and social relations. Portrayals of a "weak state" captured by a landed oligarchy have similarly neglected the enduring institutional legacies of American colonial rule and the importance of state resources for the accumulation of wealth and power in the Philippines.

The author, by contrast, argues that the roots of bossism in the Philippines lie in the inauguration of formal democratic institutions at a relatively early stage of capitalist development. Poverty and insecurity leave many voters vulnerable to clientelist, coercive, and financial pressure, and the state's central role in capital accumulation provides the basis for local bosses' economic empires and political machines. These contradictions have encouraged bossism in the Philippines, as well as in other countries.

The book elaborates these arguments through case studies of bosses in two Philippine provinces, Cavite and Cebu. The contrast between single-generation gangster politicians in Cavite and enduring commercial dynasties in Cebu reveals variation in the forms of bossism that reflect variations in the local political economies of the two provinces. Comparisons between bosses over successive historical periods highlight the gradual transformation of bossism through capitalist development. In sum, Capital, Coercion, and Crime provides a comparative historical analysis of bossism, drawing conclusions of great interest not only to scholars of Southeast Asia but to students of comparative politics as well.

John T. Sidel is Lecturer in South East Asia Politics at the School of Oriental and African Studies, University of London.

"This book is certainly a contribution to the literature on Philippine politics, comparative politics, and state-society relations. It builds on, while going significantly beyond, what other scholars have done and lays out a reasoned argument that future scholarship will have to engage about how public offices are won and lost and for whose benefit."

"...Sidel has written a superb and pioneering analysis that defines the future course for studies of local elites—not only in the Philippines but elsewhere as well."