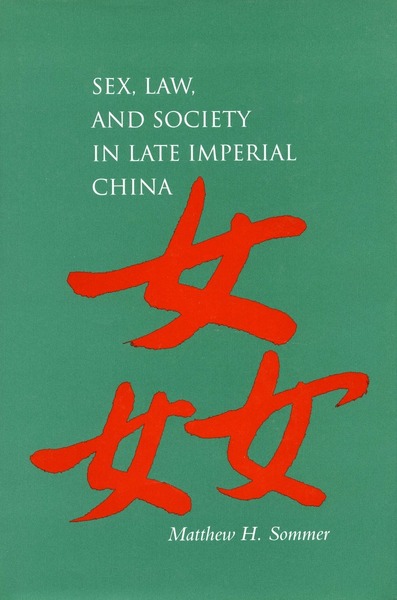 This study of the regulation of sexuality in the Qing dynasty explores the social context for sexual behavior criminalized by the state, arguing that the eighteenth century in China was a time of profound change in sexual matters. During this time, the basic organizing principle for state regulation of sexuality shifted away from status, under which members of different groups had long been held to distinct standards of familial and sexual morality. In its place, a new regime of gender mandated a uniform standard of sexual morality and criminal liability across status boundaries—all people were expected to conform to gender roles defined in terms of marriage.

This shift in the regulation of sexuality, manifested in official treatment of charges of adultery, rape, sodomy, widow chastity, and prostitution, represented the imperial state’s efforts to cope with disturbing social and demographic changes. Anachronistic status categories were discarded to accommodate a more fluid social structure, and the state initiated new efforts to enforce rigid gender roles and thus to shore up the peasant family against a swelling underclass of single, rogue males outside the family system. These men were demonized as sexual predators who threatened the chaste wives and daughters (and the young sons) of respectable households, and a flood of new legislation targeted them for suppression.

In addition to presenting official and judicial actions regarding sexuality, the book tells the story of people excluded from accepted patterns of marriage and household who bonded with each other in unorthodox ways (combining sexual union with resource pooling and fictive kinship) to satisfy a range of human needs. This previously invisible dimension of Qing social practice is brought into sharp focus by the testimony, gleaned from local and central court archives, of such marginalized people as peasants, laborers, and beggars.

"This book will be indispensible reading for China scholars studying late imperial law, traditional gender norms, the social life of the non-elite, and the history of the reach of the state. It is simultaneously a primer on traditional Chiense law and a study of law as 18th-century social engineering."

"This is a valuable book which places the study of sexuality in late imperial China on a much firmer footing than heretofore."

"The book is meticulously referential and bibliographic, a foundation and primer for further studies in related areas of law and society."–Journal of Asian History

"In this fascinating book, Matthew H. Sommer . . . discusses legislation regulating sexuality in China during the Qing dynast (1644-1912), with looks back into previous dynasties. . . . His work fits with recent interest among history and gender history, but Sommer brings these together in a particularly fruitful manner to give new insights into late imperial society. . . . Sommer's careful theorizing makes Sex, Law, and Society important reading for specialists in all periods. At the same time, with its wealth of illustrative details and contextual explanations, the book is accessible to general readers."

"This path-breaking book describes how the Qing state dealth with jian, a Chinese term which the author translates as "illicit sexual intercourse". . . . Sommer's work provides an unparalleled view of order and disorder in early modern China. It will become a classic of non-Western legal history and required reading for anyone interested in the history of gender and human rights in Asia."

"Matt Sommer's study of sex and law in late imperial China is a vivid and well-written portrayal of how law worked in several key situations involving the regulation of sexuality: marriage, adultery, prostitution, and sex between men."

"It will become a classic of non-Western legal history and required reading for anyone interested in the history of gender and human rights in Asia."

—Comparative Studies in Society and History