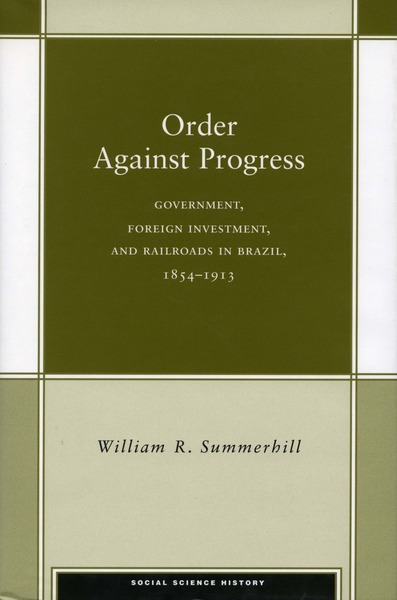 How did foreign investment in infrastructure affect a relatively backward Latin American economy? The author engages this long-standing issue in Latin American history by applying the methods of the “new economic history” to the study of Brazilian railway development.

Railroads have long been viewed as having intensified Brazil’s dependence on foreign product and capital markets in the second half of the nineteenth century. Because steam locomotion in Brazil relied heavily on British finance in an age of export-led economic growth, many scholars have viewed railroads as magnifying economic dependency in ways that benefited foreign investors and export agriculture at the expense of the Brazilian economy as a whole.

This study combines extensive archival research in Brazil and Britain with cliometric methods to present a new and provocative picture of the impact of railroads on the Brazilian economy. The book’s findings reveal that the savings on transport costs provided by the railroad accounted for a large share of the Brazilian economy’s gains before 1914. Indeed, thanks largely to the savings generated by railroad investments, in the early twentieth century Brazil emerged from decades of stagnation to become one of the Western world’s fastest growing economies. Moreover, foreign investors in Brazilian railroads failed to reap profits commensurate with the benefits their investments produced within Brazil: government policies on subsidy and regulation enabled Brazil to capture and retain most of the gains resulting from transport improvements.

Combined with other significant changes of the era, railroad development favored immigration, the expansion of agriculture, and the growth of manufacturing in an economy that had long been laggard. In addition to drawing substantive conclusions about the Brazilian case, this book demonstrates that the techniques of the new economic history provide Latin American specialists with a rich array of tools to identify and assess the various consequences of technological and institutional change in historical perspective.

William R. Summerhill III is Associate Professor of History at the University of California, Los Angeles.

"Order Against Progress sheds new light on the debate about the role of railroads in nineteenth-century Brazil. The author's results are solidly grounded in a variety of documentary evidence, despite the scarcity of documents for the earlier periods."

"Based upon thorough research, this well-written book represents a welcome and useful addition to the scattered literature on the history of Brazil's railroads."

"Summerhill's book will be a criitical reference for students of Brazilian economic history. He has amassed a wealth of quantitative data on railroads in Brazil, which he has enhanced with comprative analyses of the sector in other countries."

"The book is very well-written, clearly organized, and the issues at stake are precisely isolated and analyzed. It is an enlightening resource for those who are interested to know what new economic history is able to produce."