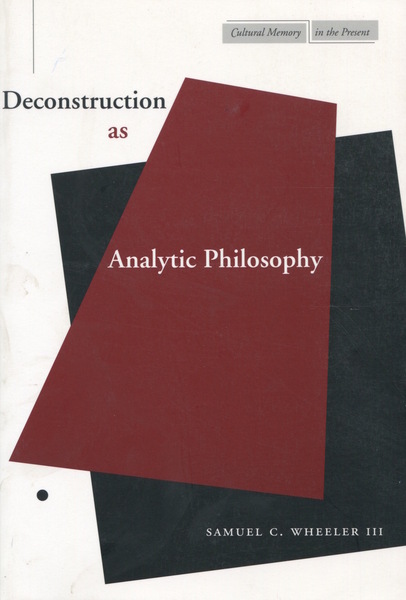 In this collection of essays Samuel Wheeler discusses Derrida and other “deconstructive” thinkers from the perspective of an analytic philosopher willing to treat deconstruction as philosophy, taking it seriously enough to look for and analyze its arguments. The essays focus on the theory of meaning, truth, interpretation, metaphor, and the relationship of language to the world. Wheeler links the thought of Derrida to that of Davidson and argues for close affinities among Derrida, Quine, de Man, and Wittgenstein. He also demonstrates the propinquity of Plato and Derrida and shows that New Criticism shares deconstruction’s conception of language. Of the twelve essays in the collection, four are published here for the first time.

The fundamental resemblance between Derrida and such analytic thinkers as Quine, Wittgenstein, and Davidson, the author argues, is that they deny the possibility of meanings as self-interpreting media constituting thoughts and intentions. Derrida argues that some form of magic language has determined the very project of philosophy, and his arguments work out the consequences of denying that there are such self-interpreting mental contents. In addition, Derrida and Davidson agree in denying any “given.” Without a given, questions about realism and idealism cease to have a point. Derrida and Davidson are both committed to the textuality of all significant marks, whether in neurons or on paper. They argue that there is no mode of representation more direct than language.

Samuel C. Wheeler III is Professor of Philosophy at the University of Connecticut.

"Wheeler not only builds a bridge between continental and analytic philosophy; he also traces a useful tow path between philosophy and literary theory."