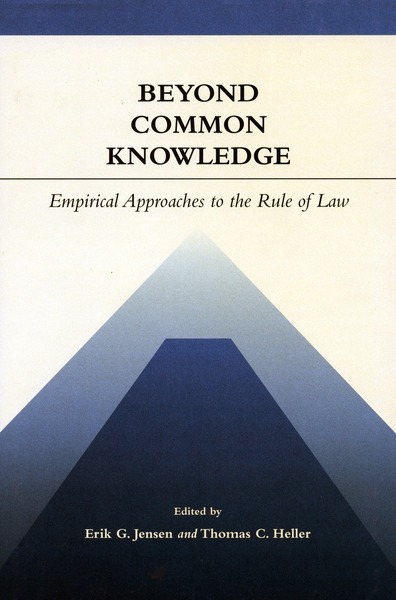 Beyond Common Knowledge
Empirical Approaches to the Rule of Law
Edited by Erik G. Jensen and Thomas C. Heller

An intensive global search is on for the "rule of law," the holy grail of good governance, which has led to a dramatic increase in judicial reform activities in developing countries. Very little attention, however, has been paid to the widening gap between theory and practice, or to the ongoing disconnect between stated project goals and actual funded activities.

Beyond Common Knowledge examines the standard methods of legal and judicial reform. Taking stock of international experience in legal and judicial reform in Latin America, Europe, India, and China, this volume answers key questions in the judicial reform debate: What are the common assumptions about the role of the courts in improving economic growth and democratic politics? Do we expect too much from the formal legal system? Is investing in judicial reform projects a good strategy for getting at the problems of governance that beset many developing countries? If not, what are we missing?

"This volume should be mandatory reading for the directors of multilateral development banks, practitioners, scholars, policymakers, and others who hope that reform of the formal justice system will bring about political and economic liberalization."

"The chapters in this volume challenge the rule of law orthodoxy and introduce a much more textured account of the shifting and varying roles of formal and informal institutions that perform legal functions across countries, exploring the variegated micro-foundations of the rule of law. No scholar or policy maker should utter the words 'rule of law' without first reading this volume."

"Beyond Common Knowledge is a call to arms, to save judicial reform programming from a passionate commitment to its goals that has blinded too many of its practitioners to lessons—drawn from recent experience and scholarship—about the complex dynamics of institutional reform."

"Beyond Common Knowledge presents a wealth of new material on legal institutions in developing and post-socialist countries. No other book contains such a rich combination of description and analysis. It is an important contribution to literature on legal and judicial reform."

"This book deserves attention as one of the most serious efforts to date to grapple with the rapidly growing field of rule-of-law development."

"This collection serves as a refreshing antidote to the boosterism of the 'rule of law,' world peace through law,' and 'international human rights law' entrepreneurs. It should be mandatory reading for any law professor embarked on an international consultation project, or establishing a development internship programme, or called upon to advise governments and development agencies."

—Canadian Journal of Law and Society

"The essays are all thought-provoking, and in some cases really excellent. And importantly, they add to the very limited stock of published and accessible empirical data on world legal systems."