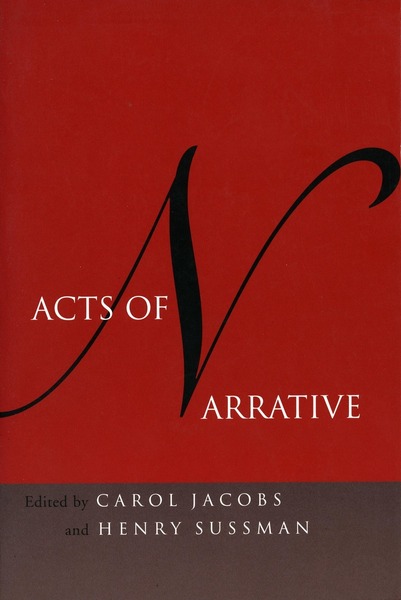 Acts of Narrative
Edited by Carol Jacobs and Henry Sussman

This outstanding collection brings together essays that reflect on the nature of narrative, literary criticism, and history from a variety of theoretical and disciplinary perspectives, ranging from deconstruction, psychoanalysis, and trauma theory, to narratology, technology, economics, and aesthetics. Acts of Narrative includes responses from renowned scholars across a wide range of disciplines: philosopher Jacques Derrida; the literary critic J. Hillis Miller; W. J. T. Mitchell, well-known for his reflections on the visual world; and Cathy Caruth, one of the founders of the field of trauma theory. These essays are brilliant in their readings of other texts, but are also striking in the manner in which each becomes itself a narrative performance. Moreover, what starts out as an exercise in theorizing and reading moves, more often than not, into a meditation on social and political issues crucial for our own sense of ourselves.

Carol Jacobs is Professor of Comparative Literature and German at Yale University. Her most recent work is In the Language of Walter Benjamin (1999). Henry Sussman is Professor of Comparative Literature at SUNY, Buffalo. He is the author, most recently, of The Aesthetic Contract: Statutes of Art and Intellectual Work in Modernity (Stanford, 1997).