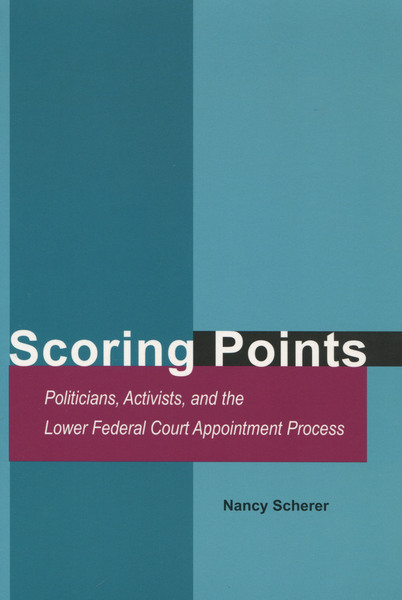 This book explores how the lower federal court appointment process became vastly politicized in the modern era. Scherer develops a theory of “elite mobilization,” positing that lower court appointments have always been used by politicians for electoral purposes, but because of two historic changes to American institutions in the 1950s and 1960s—the breakdown of the old party system, and a federal judiciary reception to expanding individuals’ constitutional rights—politicians shifted from an appointment system dominated by patronage to a system dominated by new policy-oriented appointment strategies.

Nancy Scherer is Assistant Professor of Political Science at The Ohio State University.

"...Scoring Points is an important contribution to the literature on the selection of lower federal court judges, and more generally on the American political system."

"Scoring Points is a provocative work that breaks new theoretical ground in linking the transformation of the American party system to the politicization of the federal judiciary. Scherer is a forceful advocate for her thesis. This is a book that will be discussed and cited for years to come."

"What a splendid, and spectacularly timely, achievement! Scherer has produced the best discussion, by far, of political contests over the lower federal courts. Her discussion is full of surprises about American history, American politics, and American judges. A truly indispensable guide."