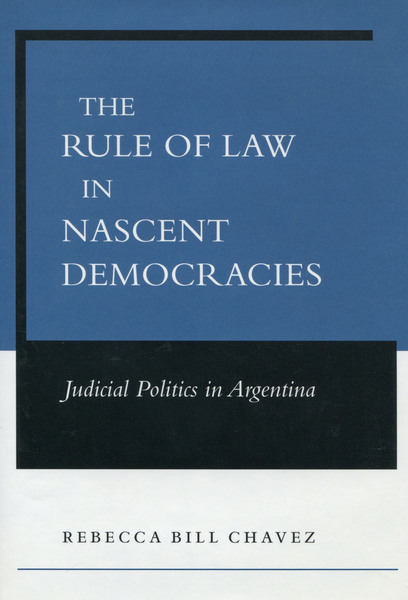 This book explains how the rule of law emerges and how it survives in nascent democracies.

The question of how nascent democracies construct and fortify the rule of law is fundamentally about power. By focusing on judicial autonomy, a key component of the rule of law, this book demonstrates that the fragmentation of political power is a necessary condition for the rule of law. In particular, it shows how party competition sets the stage for independent courts.

Using case studies of Argentina at the national level and of two neighboring Argentine provinces, San Luis and Mendoza, this book also addresses patterns of power in the economic and societal realms. The distribution of economic resources among members of a divided elite fosters competitive politics and is therefore one path to the requisite political fragmentation. Where institutional power and economic power converge, a reform coalition of civil society actors can overcome monopolies in the political realm.

"This book is a welcome addition to a young but growing body of scholarly work on rule-of-law construction in new democracies from a political science perspective. Rebecca Bill Chavez develops a persuasive study of the conditions under which rule of law is more likely to emerge, through an analysis of judicial politics at the national level in Argentina and in two of its provinces, San Luis and Mendoza."

"Chavez's work is well written and reasoned and is an important contribution to the literature on judicial development in emerging democracies. The evidence cited in her work is compelling: Political competition does make a difference as to whether a judiciary will be able to operate free from political domination."

"In her excellent book, Rebecca Bill Chavez intertwines legal, political, and historical analysis of Argentina to explore the conditions in which an independent judiciary emerges, consolidates, and endures. The book is not only timely but also important as a contribution to the literature....The skillful field research and historical insight coupled with theoretical analysis make this book a valuable and reliable piece of work."

"[A] very thought provoking work....[Chavez's] exploration of the interaction between the separation of powers and the role of courts over nearly a century and a half is elegant."