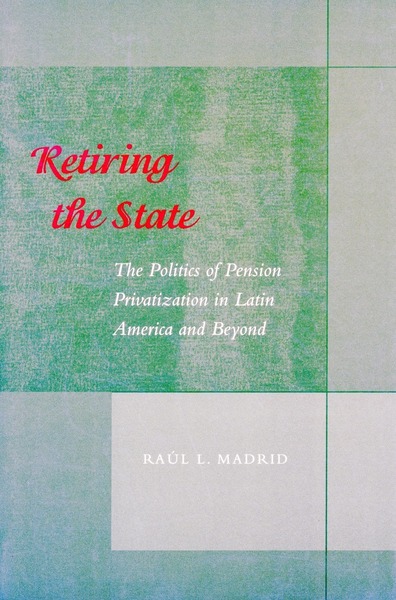 Retiring the State
The Politics of Pension Privatization in Latin America and Beyond
Raúl L. Madrid

In the 1990s, numerous Latin American nations privatized their public pension systems. These reforms dramatically transformed the way these countries provide retirement income, and they provoked widespread protests from workers and pensioners alike. Retiring the State represents the first book-length study of the origins of this surprising trend.

Drawing on original field research, including interviews with key policymakers, Madrid argues that the recent reforms were driven not by social policy, but by macroeconomic concerns. Countries facing growing financial pressures chose to privatize their pension systems largely to boost their domestic savings rates and reduce public pension spending in the long run. The author explores his arguments through detailed case studies of pension reform in Argentina, Brazil, and Mexico, a survey of social security privatization efforts in East Europe and Latin America as a whole, and a quantitative analysis of pension privatization worldwide.

Raúl L. Madrid is Assistant Professor of Government at the University of Texas, Austin.

"[Madrid] demonstrates a mastery of the relevant empirical material, and he makes a convincing case that the causes of pension reform in Latin America are different from the causes of welfare reform more generally."

"Madrid demonstrates a deep knowledge of the literature; uses a sophisticated methodology; treats the subject in a comprehensive, comparative, systematic, and analytical manner; and arrives at reasonable conclusions based on solid evidence....[an] excellent book..."