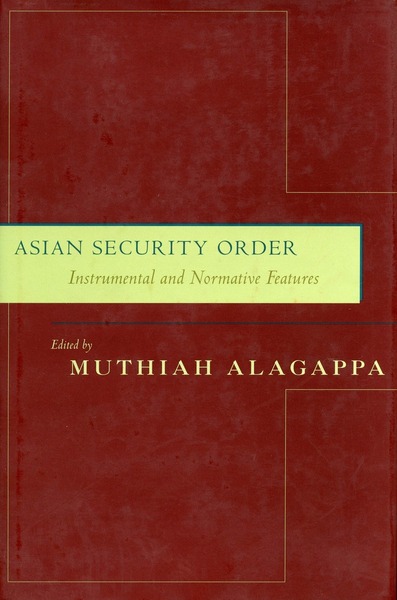 More than a decade has passed since the end of the Cold War, but Asia still faces serious security challenges. These include the current security environment in the Korean peninsula, across the Taiwan Strait, and over Kashmir, the danger of nuclear and missile proliferation, and the concern with the rising power of China and with American dominance. Indeed, some experts see Asia as a dangerous and unstable place. Alagappa disagrees, maintaining that Asia is a far more stable, predictable, and prosperous region than it was in the postindependence period. This volume also takes account of the changed security environment in Asia since September 11, 2001.

Unlike many areas-studies approaches, Alagappa’s work makes a strong case for taking regional politics and security dynamics seriously from both theoretical and empirical approaches. The first part of this volume develops an analytical framework for the study of order; the salience of the different pathways to order is examined in the second part; the third investigates the management of specific security issues; and the final part discusses the nature of security order in Asia.

"Asian Security Order is Muttiah Alagappa's third and final volume on a subject of vital and growing importance in world politics. It is the capstone volume of a theoretically sophisticated, intellectuallyintegrated, empirically rich, and politically sensitive set of inquiries. In the empirically informed literature on international relations, I know of no scholar writing on Asian security who comes close to matching the coherent and compelling vision of a politically relevant social science that Alagappa has succeeded in articulating. Like its two predecessors, this book will become required reading for any serious student of Asian security."

"Asian Security Order offers a complex and comprehensive, yet accessible analysis of the fundamental forces shaping security in Asia."