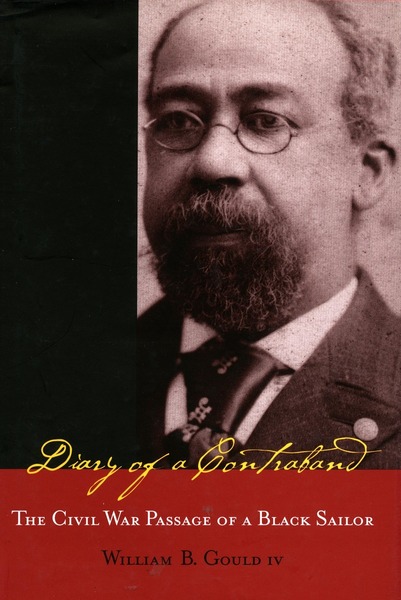 Diary of a Contraband
The Civil War Passage of a Black Sailor
William B. Gould IV With a Foreword by Senator Mark O. Hatfield

The heart of this book is the remarkable Civil War diary of the author’s great-grandfather, William Benjamin Gould, an escaped slave who served in the United States Navy from 1862 until the end of the war. The diary vividly records Gould’s activity as part of the North Atlantic Blockading Squadron off the coast of North Carolina and Virginia; his visits to New York and Boston; the pursuit to Nova Scotia of a hijacked Confederate cruiser; and service in European waters pursuing Confederate ships constructed in Great Britain and France.

Gould’s diary is one of only three known diaries of African American sailors in the Civil War. It is distinguished not only by its details and eloquent tone (often deliberately understated and sardonic), but also by its reflections on war, on race, on race relations in the Navy, and on what African Americans might expect after the war.

The book includes introductory chapters that establish the context of the diary narrative, an annotated version of the diary, a brief account of Gould’s life in Massachusetts after the war, and William B. Gould IV’s thoughts about the legacy of his great-grandfather and his own journey of discovery in learning about this remarkable man.

William B. Gould IV is the Charles A. Beardsley Professor of Law at Stanford University. He served as Chairman of the National Labor Relations Board during the Clinton administration, and has written extensively in labor law.

"[Diary of a Contraband provides] modern readers with vivid insight into the life and thought of a man who overcame the degradations of slavery, actively sought his own freedom and fought to make it permanent, and in the end forged a new life as a full citizen . . . .An unusual work, [it is] one of only three wartime diaries kept by black sailors."

"Diary of a Contraband offers a fascinating picture of everyday life for sailors and cilivians in the 1860s. It also provides tantalizing details of antebellum Willington that have seldom made their way into written history."

"In all, the book is a valuable addition to the continuously growing literature on both the Civil War at sea and the history of race in America."

"We can thank both Goulds for Diary of a Contraband. It is a significant contribution to both Civil War and African American literature."