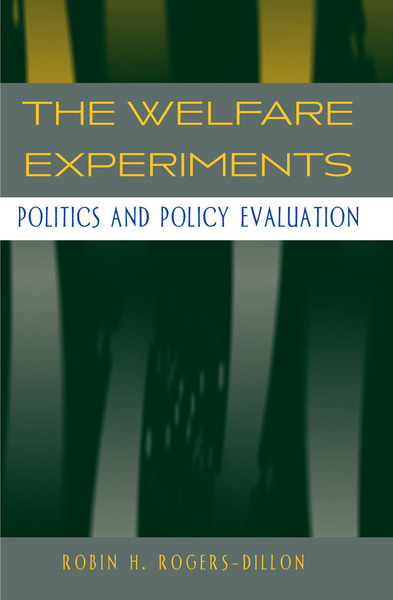 Welfare experiments conducted at the state level during the 1990s radically restructured the American welfare state and have played a critical—and unexpected—role in the broader policymaking process. Through these experiments, previously unpopular reform ideas, such as welfare time limits, gained wide and enthusiastic support. Ultimately, the institutional legacy of the old welfare system was broken, new ideas took hold, and the welfare experiments generated a new institutional channel in policymaking.

In this book, Rogers-Dillon argues that these welfare experiments were not simply scientific experiments, as their supporters frequently contend, but a powerful political tool that created a framework within which few could argue successfully against the welfare policy changes. Legislation proposed in 2002 formalized this channel of policymaking, permitting the executive, as opposed to legislative, branches of federal and state governments to renegotiate social policies—an unprecedented change in American policymaking. This book provides unique insight into how social policy is made in the United States, and how that process is changing.

"The Welfare Experiments makes a major contribution to the literature not just on welfare policy, but also on the politics of the policy process and public administration. This is a serious, sobering look at one of the most important periods in American policymaking history. Rogers-Dillon calls into serious question the possibility—and perhaps even the desirability—of rendering the policy process more scientific. A disturbing and necessary book, for supporters and opponents of welfare alike."

"In The Welfare Experiments, Robin Rogers-Dillon presents a thorough and incisive analysis of recent legislative developments in welfare reform and introduces a note of skepticism regarding the executive branch's creation of a system of change that now bypasses legislative approvals. This important work sounds cautions not only for welfare, but also for the broader range of social policy that surrounds the welfare system."

"The author presents her argument in a clear and incisive way and provides a rich source of information about how the waiver projects gradually evolved to shape a coherent political agenda."

"Robin Rogers-Dillon contributes and important new perspective on the ushering in of welfare reform, highlighting the pivotal political role of state-level waivers and welfare experiments."

"It is a book that deserves to be read by those at any level who are studying or practicing the art of political and social change..."