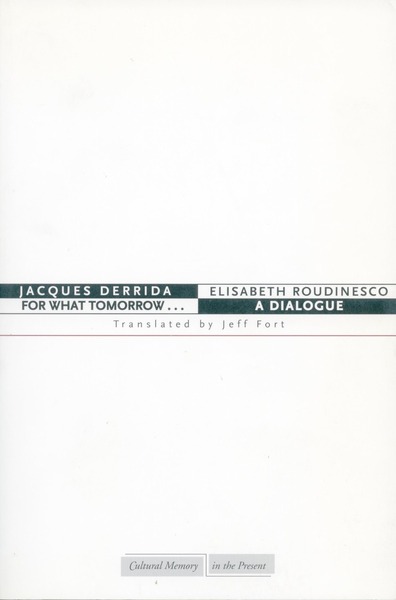 For What Tomorrow . . .
A Dialogue
Jacques Derrida and Elisabeth Roudinesco, Translated by Jeff Fort
SERIES: Cultural Memory in the Present

“For what tomorrow will be, no one knows,” writes Victor Hugo.

This dialogue, proposed to Jacques Derrida by the historian Elisabeth Roudinesco, brings together two longtime friends who share a common history and an intellectual heritage. While their perspectives are often different, they have many common reference points: psychoanalysis, above all, but also the authors and works that have come to be known outside France as “post-structuralist.”

Beginning with a revealing glance back at the French intellectual scene over the past forty years, Derrida and Roudinesco go on to address a number of major social and political issues. Their extraordinarily wide-ranging discussion covers topics such as immigration, hospitality, gender equality, and “political correctness”; the disordering of the traditional family, same-sex unions, and reproductive technologies; the freedom of the “subject” over and against “scientism”; violence against animals; the haunting specter of communism and revolution; the present and future of anti-Semitism (as well as that which marked Derrida’s own history) and the hazardous politics of criticizing the state of Israel; the principled abolition of the death penalty; and, to conclude, a chapter “in praise of psychoanalysis.”

These exchanges not only help to situate Derrida's thought within the milieu out of which it grew, they also show more clearly than ever how this thought, impelled by a deep concern for justice, can be brought to bear on the social and political issues of our day. What emerges here above all, far from an abstract, apolitical discourse, is a call to take responsibility—for the inheritance of a past, for the singularities of the present, and for the unforeseeable tasks of the future.

"Jacques Derrida, notorious for producing intensely difficult works on aspects of the history of philosophy, here shows himself in another light dealing concretely and practically with some of the pressing social and political issues of our day."