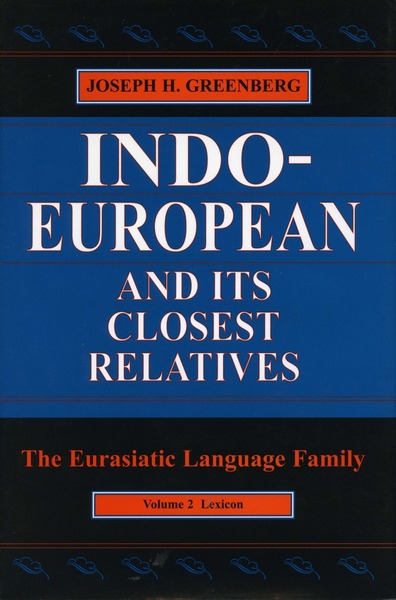 The basic thesis of this two-volume work (Volume I. Grammar was published in 2000) is that the well known and extensively studied Indo-European family of languages is but a branch of a much larger Eurasiatic family that extends from Europe across northern Asia to North America. Eurasiatic is seen to consist of Indo-European, Uralic-Yukaghir, Altaic (Turkic, Mongolian, and Tungus-Manchu), Japanese-Korean-Ainu (possibly a distinct subgroup of Eurasiatic), Gilyak, Chukotian, and Eskimo-Aleut. The author asserts that the evidence presented in the two volumes for the validity of Eurasiatic as a single linguistic family confirms his hypothesis since the numerous and interlocking resemblances he finds among the various subgroups can only reasonably be explained by descent from a common ancestor.

The present volume provides lexical evidence for the validity of Eurasiatic as a linguistic stock. Since some of the relevant etymological material has already been published in the work of some Nostraticists, this volume emphasizes those etymologies involving Ainu, Gilyak, Chukotian, and Eskimo-Aleut, languages generally omitted from Nostratic studies. The Eurasiatic family is itself most closely related to the Amerind family, with which it shares numerous roots. The Eurasiatic-Amerind family represents a relatively recent expansion (circa 15,000 BP) into territory opened up by the melting of the Arctic ice cap. Eurasiatic-Amerind stands apart from the other families of the Old World, among which the differences are much greater and represent deeper chronological groupings.

The volume includes a classification of Eurasiatic languages, references cited, and semantic and phonetic indexes.

“This last (and posthumous) work of the 20th century’s greatest anthropological linguist is fundamental to the cross-disciplinary conversation among linguists, archaeologists, and geneticists. As a lexicon comparing a unique set of languages, it is also a reference book that scholars will want to refer to.”—Carol F. Justus, University of Texas at Austin