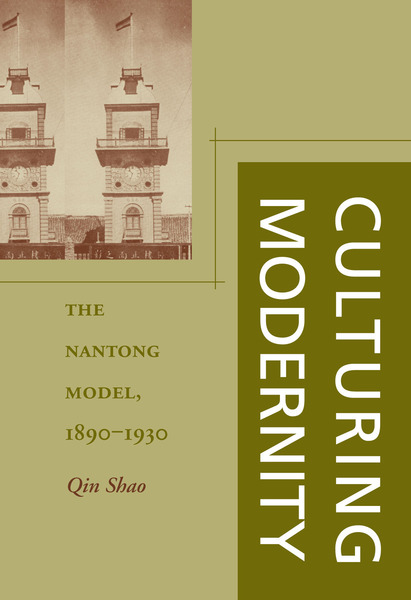 This is a multidimensional study of a simulation of modernity that transformed Nantong, a provincial town, from a rural backwater to a model of progress in early twentieth-century China. The author analyzes this transformation by depicting the new institutional and cultural phenomena used by the elite to exhibit the modern: a museum, theater, cinema, sports arenas, parks, photographs, name cards, paper money, clocks, architecture, investigative tourism, and public speaking. In focusing on this exhibitory modernity and its role in reconstructing this local community and in promoting “the Nantong model” nationwide, the book sheds intriguing new light on the connections between local and national politics and rural and urban experience.

Qin Shao is Associate Professor of History at the College of New Jersey.

"[Shao's] book is the most complete and best history of Zhang Jian and Nantong available."

"Qin Shao's project has ambitious new dimensions. She has not only taken advantage of newly published sources and archives and repeatedly visited Nantong to look with new eye and make extensive interviews. She thoughtfully draws on an eclectic variety of theory to comment on the pitfalls of the concept "modernity," the role of reform models in modern China, and the interplay of the national vs. local and past vs. present... In short, then, Shao's volume is an exemplary monograph, and an important contribution to the study of China's modernity."

"Shao's book is based on a wealth of archival and interview sources, and provides a thoughtful reassessment of how 'modernity' was experienced in China outside the big cities."

"Shao Qin's monograph deserves praise for its deft handling of theory and its emphasis on the domestic roots of Chinese urban reform."