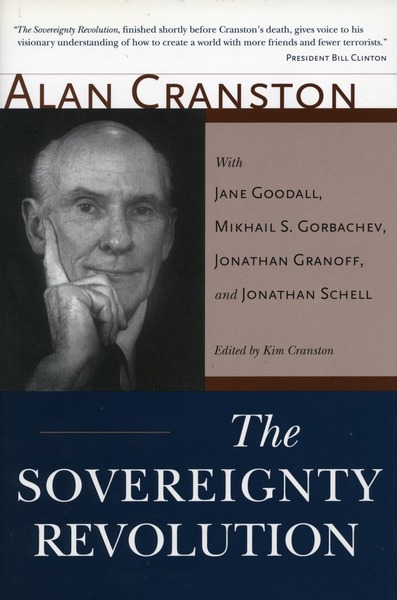 The Sovereignty Revolution is the late Senator Alan Cranston's analysis of the problems created by our current conception of sovereignty, "with every nation supreme inside its own borders and acknowledging no master outside them." As such, it is the last testament of a senior statesman with a deep moral commitment to nuclear disarmament.

This book is an impassioned argument that these conceptions of sovereignty, and in turn the role of international institutions, must change before humanity can effectively resolve the world's increasingly global challenges, from international terrorism and the proliferation of nuclear weapons to climate change and poverty. Cranston argues that for humanity to survive the twenty-first century, we must adopt a more encompassing understanding of sovereignty, one that acknowledges the primacy of the individual, while emphasizing the importance of strengthening international law and increasing the authority of multilateral institutions, such as the United Nations. The book includes a foreword by Mikhail Gorbachev, an Introduction by Jonathan Schell, and response essays by Jane Goodall and Jonathan Granoff.

Alan Cranston retired in 1993 after serving four terms as a U.S. Senator and 14 years as Democratic Whip. Especially noteworthy were his efforts in regard to world peace, nuclear arms control, enhanced Hemispheric relations, expanded trade, and reduced military spending. Kim Cranston is Chair of the Global Security Institute.

"Senator Alan Cranston was a passionate public servant, a true citizen of the world and an inspirational force for peace. The Sovereignty Revolution, finished shortly before his death, gives voice to his visionary understanding of how to create a world with more friends and fewer terrorists. The Senator argues that we must revise our notions of sovereignty if we are to meet the global challenges of the 21st century. While we mourn his loss, how fortunate we are to have this book—a gift of his wisdom reflecting the lessons of a lifetime."

"Alan Cranston's incisive essay covers international problems as wide ranging as nuclear proliferation, terrorism, climate change and genocide. It is his assessment that no nation can solve these problems on its own, rather they have to work through multilateral institutions and international law. This analysis—by the former U.S. Senator and world statesman—provides clarity on problems that have become important after 9/11, and will remain important in our quest for world peace."

"Focusing on the concept of national sovereignty and its fluctuating definition throughout the centuries, Alan Cranston proceeds to outline the historical and philosophical bases for a renewed vision of human cooperation. This slim but powerful volume is a testament not only to Senator Cranston's impassioned labor as a scholar and statesman, but to his hopes, shared by many at the beginning of the twenty-first century, for a more rational and ethical world order."

—Oscar Arias Sánchez, Winner of The Nobel Peace Prize in 1987

"Alan Cranston's insights are the result of a lifetime of study and passionate struggle for a safer world. He was focused, tenacious, and a champion for human rights. In this final essay, he makes an enormous contribution to current foreign policy debates."

—Nancy Pelosi, Democratic Leader of the House of Representatives

"The Sovereignty Revolution is the last testament of a senior U.S. statesman on the need for rethinking the international rules and organizations we have set up for our mutual security."

—Scott D. Sagan, Director of the Center for International Security and Cooperation and Professor of Political Science, Stanford University