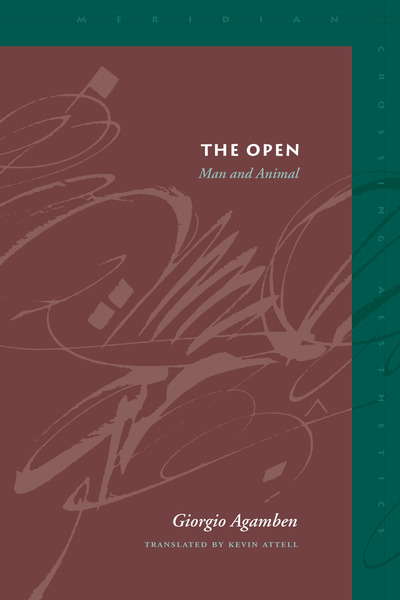 The end of human history is an event that has been foreseen or announced by both messianics and dialecticians. But who is the protagonist of that history that is coming—or has come—to a close? What is man? How did he come on the scene? And how has he maintained his privileged place as the master of, or first among, the animals?

In The Open, contemporary Italian philosopher Giorgio Agamben considers the ways in which the "human" has been thought of as either a distinct and superior type of animal, or a kind of being that is essentially different from animal altogether. In an argument that ranges from ancient Greek, Christian, and Jewish texts to twentieth-century thinkers such as Heidegger, Benjamin, and Kojève, Agamben examines the ways in which the distinction between man and animal has been manufactured by the logical presuppositions of Western thought, and he investigates the profound implications that the man/animal distinction has had for disciplines as seemingly disparate as philosophy, law, anthropology, medicine, and politics.

Giorgio Agamben is Professor of Philosophy at the University of Venice. This is the fifth of his books published by Stanford; previous titles are Homo Sacer: Sovereign Power and Bare Life (1998), The Man Without Content (1999), The End of the Poem (1999), and Potentialities (1999).

"[The Open] turns to perhaps the most basic distinction of existence: that between human beings and animals. The thin volume provides an impressive historical survey of the problem, offering a dizzying scope of debate over the nature of animality, including expositions of figures as diverse as Thomas Aquinas, Georges Bataille, Heidegger, Alexander Kojève, Benjamin, and the German zoologist Jakob von Uexküll."